Hand D, the fragment of lost play Sir Thomas More, thought to be in Shakespeare's handwriting, is in the news again. 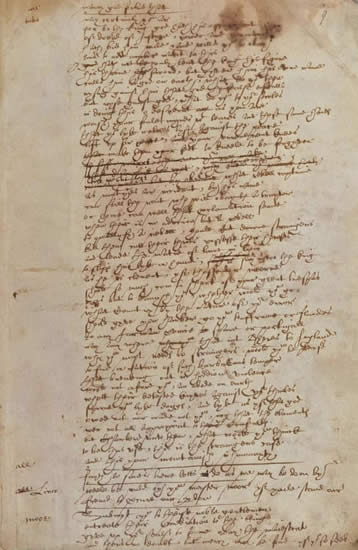 Professor Douglas Bruster, of the University of Austen, Texas, has joined Brian Vickers in claiming that a series of additions to Thomas Kyd's Spanish Tragedy are attributable to Will. Rather than using stylometrical data as Vickers did, Professor Bruster is basing his analysis on the more traditional characteristic idiosyncrasies, which have been used by Will's editors to improve texts over hundreds of years to eliminate inconsistencies caused by errors in transcription or production in the First Folio and surviving Quarto texts.

To simultaneously spoil the Oxfordian day, in his paper, Mr. Bruster identifies 24 broad spelling patterns — including shortened past tenses (like “blest” for “blessed”) and single medial consonants (like “sorow” instead of “sorrow”) — that occur both in the Additional Passages of The Spanish Tragedy, for which no known manuscript survives, and the Shakespeare handwriting sample in the British Library. He also cites nine textual “corruptions” (like “creuie” instead of “creuic,” modernized as “crevice”) that he believes can be explained as misreadings of Shakespeare’s handwriting.

These are consistent with the idiosyncrasies that have been detected by editors over the years from mistakes in the First Folio likely to have been caused by the misreading of actual handwriting. Looking at the additional passages for The Spanish Tragedy, Bruster says “What we’ve got here isn’t bad writing, but bad handwriting,”

The characteristic handwriting errors Bruster identifies triangulate rather nicely with what we can see in Hand D. If any evidence of this quality cropped up on the Oxfordian side of the argument, the churchbells would be ringing.

Standing foursquare behind Elliot and Valenza's stylometric work, we at Oxfraud have adopted their non-committal position on Hand D. E&V don't rule out Shakespeare as the author of the pages of Sir Thomas More, but they can't quite convince themselves. 'Possibly' they say, 'but not in 1593'. They just won't come down off the fence. Given how categoric E&V can be when eliminating candidates like De Vere, this kind of gentle hesitation is interpreted as sufficient confirmation by many believers in Hand D.

The story, therefore, is not going to end here.

A firm attribution of Hand D to Shakespeare through more evidence, stronger connections and more convincing paleology, will simply toss the whole Oxfordian Fallacy into the Thames. Even though Professor Bruster takes us only a couple of inches further along the road, it's valuable progress.

Satisfactory proof that Hand D is Will's will be enough to deep six the entire authorship question.

Now there's a worthy objective for the quartercentenary. Get those magnifying glasses out!