If De Vere wrote Hamlet, then the cherished Oxfordian textual analysis of the hawk and the handsaw moment does a disservice to the Earl's subtlety in creating character, narrative and meaning. Although Oxfordians are anxious to claim elite knowledge of falconry on behalf of the Earl, there is no 'riddle' to the hawk and the handsaw. Obviously, the playwright knew, when he chose the word handsaw, that his audience would probably think of, well, a handsaw. When The Globe was closed there would be hawks and handsaws all over the stage. However, Will loves a bit of wordplay and yes, the word ‘heronshaw’ or harnsa’ is there behind it, chiming with hawk. It's an excellent example of the 'doubleness', which pervades the structure, characterisation and imagery of the whole play

The first meaning hints at Hamlet's awareness that he is the heron who is the potential victim of Claudius, the hawk. The second hawk is the plasterer's tool. By linking it with the more transparent meaning of handsaw, Hamlet makes it clear to Rosencrantz and Guildenstern that he knows they are merely the tools of Claudius. he is offering them the chance to show loyalty. The total effect of this deliberately ambiguous imagery is to suggest the duality of Hamlet's sensibility 'blown' in two different directions: one moment airborne, metaphysical and away with the birdies, the next grounded, pragmatic and workmanlike.

A bit brutal isn't it - to reduce this dense, complex cluster of signification to a snapshot of The Earl with a huge peregrine falcon on his wrist and to privilege the playwright's leisure pursuits over his extraordinary gifts as a writer? To do so is to strip this moment in the play of its dramatic power, narrative meaning and linguistic ingenuity. I'm sure Oxfordians don't make these kind of reductive judgements every time they analyse a Shakespeare text .That really would be an anti -Shakespearean thing to do in the sense that it's chucking out of Shakespeare everything that makes it Shakespeare. But then they do seem rather fond of inflating the falconry references in the plays. 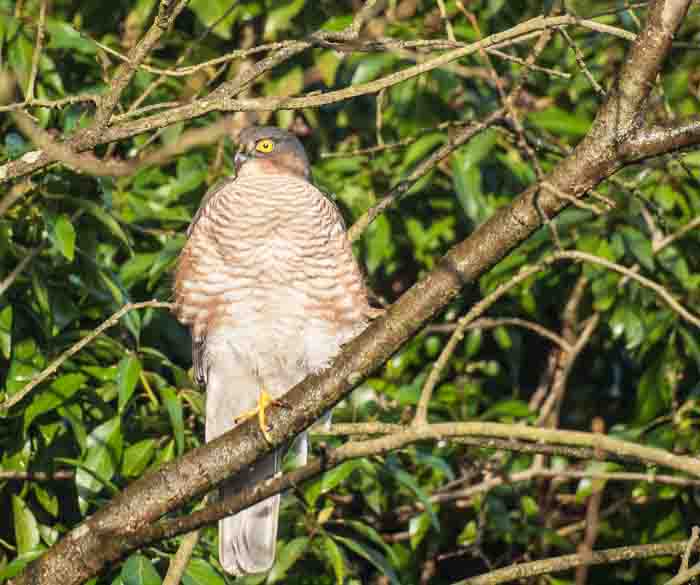 A sparrowhawk in alfa's garden. Not the biggest but the most ferocious.
Everything froze, even the cats and squirrels, while this chap was taking a look around.

These are actually outnumbered by mentions of 'liming' - the countryman's practice of smearing a sticky substance on trees to catch birds. In any case, the unprestigious sparrowhawks and kestrels had been used by the common sort of chap for centuries to catch pigeons for pies so there is no reason why Will shouldn't have known the hawking terminology used in Othello and elsewhere. Kestrels, as the 1486 Book of St Albans makes clear, are for knaves. And yes, there ARE herons in Warwickshire. I have seen them flying over my village on the border of this county in the early morning looking for garden ponds which contain their breakfasts.

An 1898 dictionary of English dialect words lists 'Harnsa' as used in East Anglia but it was also found in faraway Yorkshire. What we call 'dialect words' are almost always words that were standard in the Middle Ages but which died out in some parts of the country and survived in the more remote areas. Chaucer's Squire's Tale opens with a banquet where guests are feasting on swans and ‘heronsewes’- from the Old French ‘herronceau,’ meaning a young heron . Thus it is entirely possible in the sixteenth century for the word to be known by an author from Warwickshire or one from East Anglia, or anywhere else for all we know. All a dialect dictionary does is to tell you where a word was when it was recorded and not where it might have been in the past.

Caroline  Spurgeon shows 35 occurrences of hawks or falcons compared to 60 turtle doves and 44 geese. If ornithology had anything to do with authorship, we might imagine the author not as an aristocratic falconer but an incurable romantic who worked in a farmyard. If you need to discover your candidate's favourite pastime in the plays I suppose you can find it in falconry. However, there are just as many references to the less glamorous sport of bowling.

'Ay, there's the rub', says Hamlet referring to a bump in the ground which would prevent the bowl from rolling in a straight line. He could also have been talking about the extremely simplified meanings produced when you try to squeeze an author into a text rather than appreciating the skills of the one who's already in it.