Vampires are commonplace in 21c society and very few modern families have failed to come into contact with them in one form or another. But, though they were uncommon, they were definitely around in 16C England. Could De Vere have been among their number?

Shortly after telling Oxford to 'put away his feeble pen' Gabriel Harvey says, in the 1578 'shaking spears' tribute, 'Bellona reigns in your body'. The great afterlife-themed masterpiece of 1594, Macbeth, has long been accepted as an autobiographical self-portrait by even orthodox scholars. Macbeth is described by Ross as 'Bellona's bridegroom'.

This is all bardic sleight of hand. Bellona refers not to the Roman goddess of war but to Bella (short for Bellona) the Queen Consort of Vlad the Impaler, the father of vampirism. It is no coincidence that the heroine of the recent Twilight series bears the same name.

Now we can make perfect sense of so many mysteries like the accidental but fatal leg wound which exsanguinated a servant and why Arundel thought that Oxford wanted to 'drink his blud'. Oxford actually DID want to drink his blood.

What this now absolutely explains is how Oxford was able to get through the guards and the various presence chambers and into the Queen's bedroom without notice, impregnating her with the soon to be Earl of Southampton. An Oxford who can fly at night can get anywhere. It explains how Elizabeth concealed her many children. The normal gestation period simply does not apply to the Devil's spawn. 24 hours concealment would be enough. This could even be a new Prince Chewed Her Theory.

And yonder shines Aurora's harbinger;
At whose approach, ghosts, wandering here and there,
Troop home to churchyards: damned spirits all,
That in crossways and floods have burial,
Already to their wormy beds are gone;
For fear lest day should look their shames upon,
They willfully themselves exile from light
And must for aye consort with black-brow'd night.

Past cure I am, now reason is past care,
And frantic-mad with evermore unrest;
My thoughts and my discourse as madmen's are,
At random from the truth vainly express'd;
For I have sworn thee fair and thought thee bright,
Who art as black as hell, as dark as night.

And the many biographical references to vampirism in the canon now become overwhelming. We finally see the true meaning of problem phraseologies such as 'multitudinous seas incarnadine'. Turning the sea into blood is a paradigm of vampiric fantasy.

But utterly convincing as all this is, the penny that drops most heavily is the fact that we can now say safely that Oxford did not die in 1604, he merely joined the undead. All the issues over his mysterious burial are now resolved. His tomb in Hackney merely held his carcass in daylight. At night (synchronous with the change to indoor theatre) he was free to roam.

Critics will say that it is very unlikely that a vampire produced the King James Bible but who knows really what a vampire will do? And if Ed the UnDead was a vampire, we literary detectives now have the whole field of subsequent literature to search for more of his work. 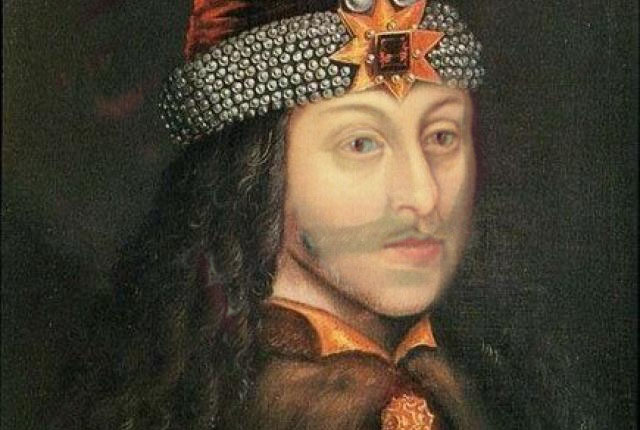 Superimposing Oxford's likeness on the portrait of Vlad leaves no room for doubt. The only perceptible difference is relative moustache length. There can be no doubt that this portrait is created from the same Paint-by-Numbers set used for Oxford's portrait.

De Vere WAS a vampire.