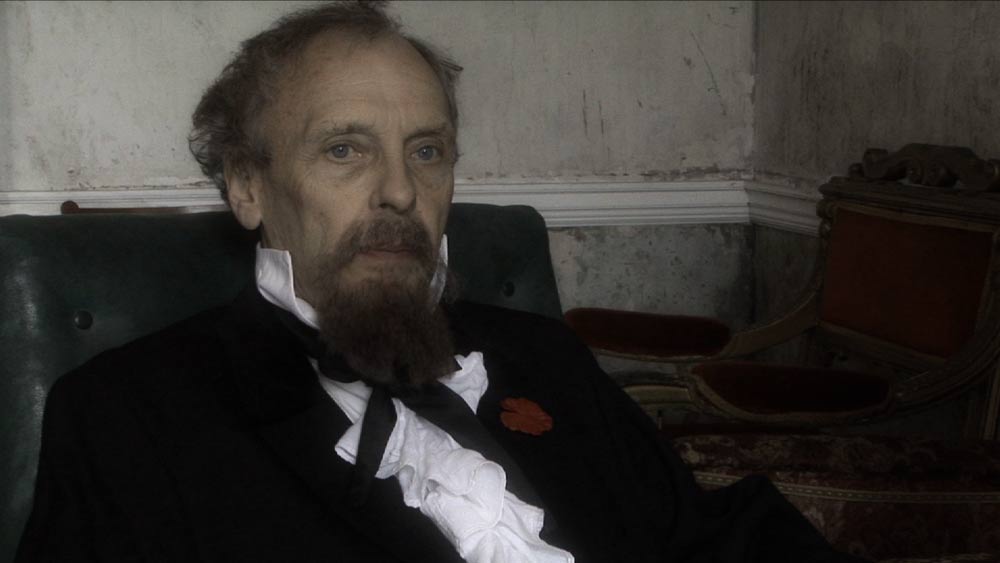 “The life of Shakespeare is a fine mystery...  I tremble every day lest something should ‘turn up’.”
—Charles Dickens

On his website, called Shak-speare's Bible, Professor Stritmatter introduces netizens to his thesis on bible references with this treasured quote. Oxfordians believe it effects the Assumption of Dickens into the Oxfordian Appeal-To-Authority Hall of Fame. Dickens is big and Dickens is a Doubter, they conclude. It's our opinion that Dickens would have set his dogs on any Oxfordians who chanced up his path for a chat.

The quote is a very revealing choice as it demonstrates a technique used over and over again in Oxfordian argument. Using a combination of misdirection, selective detail, suggestively inventive comparison and a dash of brightly spangled mendacity, the Oxfordian performer claims to be demonstrating one thing to his audience, while in the wings and backstage, everyone can see how the tricks are worked.

In the case of the Dickens trick, here's the backstage view. Ignoring the fact that Dickens is quoting the most famous line of one of his most famous characters (and any hints that may drop thereby), Stritmatter guts and fillets the passage so that the otherwise unwary reader will take this as evidence against Shakespeare. Here’s the full passage, from an 1843 letter by Dickens to Robert Sandy, which conveys a totally different sense:

“I have sent your Shakespearian extracts to [John Payne] Collier. It is a great comfort, to my thinking, that so little is known concerning the poet. It is a fine mystery; and I tremble every day lest something should come out. If he had had a Boswell, society wouldn't have respected his grave, but would calmly have had his skull in the phrenological shop-windows.”

Dickens trembles for precisely the opposite reason to the one Stritmatter is trying to palm, that more knowledge will cast doubt on Shakespeare's authorship. Rather, Dickens worries that more knowledge would turn Shakespeare into a familiar, distracting our attention away from the works themselves in favour of digging up dirt on the man himself—even digging up his bones (more than one person has come close) to examine his skull.

Stritmatter's Bible reference tricks also come from the same dissembler's handbook. In his dissertation, the task he actually sets himself is to make a convincing proposition from evidence which does not support it. To do this he has to make highly improbable things sound probable, stretching a whole series of already implausible arguments as far as they will go in a single direction. Even after turning every Oxfordian dial to 11, Stritmatter still has difficulty justifying his conclusions on the origins of the marks. Data, Tom Veal reminds us, are like prisoners. They cannot tell us what they do not know.

Here is a list of things that we do not know about the Folger Bible, even after Stritmatter spent 10 years analysing it. It's far from comprehensive.

We do not know-

If this Bible is a smoking gun, then to quote John Henry 'we have no idea what it was smoking'.

The answers to the questions about what we don't know cannot be found in this dissertation. And the same goes for most of what we do know. What you will find instead is misplaced confidence, drawing conclusions from inexcusably small subsets of the data being addressed. You will find operations executed on datasets where the multipliers have been inflated and the divisors hacked to pieces on the basis of unwarranted alterations. These manoeuvres are reinforced by further attempts at prestidigitation, like the 'Control Data' supposedly calculated from analysis of Marlowe, or the seemingly open-handed way, in Appendix K, in which Stritmatter responds to criticism addressing the obvious weaknesses of his key assumptions by answering questions not asked and defending himself from objections not made.

It's clear he is aware of these shortcomings.

When challenged on his math recently, Stritmatter was willing to bet the farm not on a total of 550 marks but on just three. He began his defence with a statement which is clearly at odds with the statistical analysis in Appendix C, supposedly proof that the overlap between the marks and the references cannot be random. Speaking about himself in the third person, he says:

In fact, Stritmatter in his dissertation goes out of his way to make clear that his conclusions do not depend on any statistical operations:

“Literary reasoning” is the process of the interpretation of literary texts to form conclusions about their meaning and significance.  In literary reasoning, numerical symbols can play a role, but they are never the whole story.  They are also not things-in-themselves; they are subordinate to logic and literary inference, to which they contribute when statistically robust.  No matter how impressive the number of marked verses which demonstrate an influence in “Shakespeare,” the inner story of these annotations is not told by numbers, but in the brief sequence of marked verses (Micah 7.9, Matthew 6.1-4 and Revelations 3.5: see chapter 26) which comment on the condition of a man whose name has been erased from history and which set forth the divine promise of his eventual redemption.  This is a matter of hermeneutics, not calculus."

There are a number of signature sleight of hand items on display here, like the way he misleadingly defines the term "literary reasoning" to enable him to argue within his own terms or the way mentions the number of marked verses, implying an overwhelmingly convincing number yet simultaneously deflecting the argument elsewhere. Or like the fat, semiotic flash in his big finish, where he hopes to convince that his special areas of expertise are conjured from profound forms of literary insight (and calculus) rather than from the back of a snake-oil salesman's covered wagon.

Well, it hasn't worked. "You just have to look where they're looking to see the conjurer's art" said an American president.

We can see what you're doing, Professor Stritmatter. And you're convincing nobody.