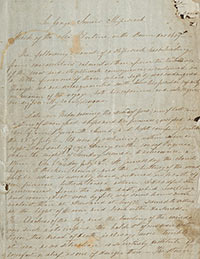 A tale from the early days of Authorship Doubters, with sincere apologies to Alistair Cooke.

Once, in the early 30's, I was travelling through The Panhandle in the tornado season when I saw a dark, sinister shape on the horizon. There was the prospect of some nearby shelter in a small church made, like so many small churches in the Mid West, of corrugated iron and I decided to take it and venture in. I arrived in the middle of what I took to be a secular lecture. A small man was treating his small audience to a parable on faith. He had obviously only just started so I decided to sit and listen.

'Now when the Oxfordian High Priests first got together for a General Assembly, on the Night of the Ides of March, they danced naked round the fires of Minerva Britainna, burning the works of Johnson, Coleridge, Hazlitt, F R Leavis, A C Bradley, George Steiner and the pages of E K Chambers they didn't want. Their most fervent prayer to the Gods of Conspiracy was that they would be able to find, somewhere in the canon, a link between real events and the text. Something to link the world of Shakespeare's creative fiction to their world (also one of creative fiction).

And the Gods of Conspiracy gave them one. The Strachey letter. And the Chief High Priest brought it down from the mountain and they all looked at it and saw that it was good. It was strong. It was hard to dispute. The description of the shipwreck could have been the opening scene of Will's last play in all but name if it too hadn't been sub-titled The Tempest.

'Hooray, Hooray,' everyone shouted 'Forsooth, it is the opening scene of The Tempest. It is the answer to all our prayers. Indisputable biographical links to the text. We are saved. Oxford is saved.'

'Hooray' the faithful followers shouted merrily, 'it's about boats and Oxford was once on a Cross-Channel ferry.' Deliriously, almost, they began to chant 'CON-CLU-SIVE. CON-CLU-SIVE.'

However, before they could properly give thanks, one of the younger, less experienced High Priests said, in a sheepish voice 'Hang on a minute, this thing is dated 15 July 1610.'

'Quiet' shouted the Dark Lord himself, to rapturous applause. 'It's no good.'

'SHUT UP' shouted the Dark Lord. 'This is a tainted offering. This comes not from the Gods of Conspiracy. This' he shouted, 'is a TRICK!'

'Ooooooo' cried the crowd, 'this is a trick. Tell us, Dark Lord, what does it mean? Why is it a trick?'

'I'll have to get back to you on that' said The Dark Lord. 'I'm going out now. I may be some time.' He turned angrily to his chief supporter. 'For the Earl's sake! Can't you teach the rabble not to question me?'

'Your wish,' Nagini hissed, 'is my command.'

So you see, said the preacher, even if your articles of faith appear to have come down from on high, it's always wise to check out the high priest's version of what's on the tablets before you go proseltysing to the masses.

And how right he was.

Of course, back in the real world, stylometry, both scholastic and statistical, has convincingly nailed The Tempest to the end of the Shakespeare timeline, years after the Earl died in 1604. Many of its stylistic eccentricities, such as starting without a Prologue in the middle of a storm at sea, came into fashion long after the Earl had left the scene. That one is still popular today, of course.

There is a huge amount of fist-shaking going on about the Strachey letter and whether it was available as a source for the Tempest or not.

There were other published sources containing the same information and survivors from the wreck wandering around London wirth a tale to tell. So it doesn't really matter whether or not you believe Will saw the Strachey letter and the other sources of information about the wreck of the Sea Venture in 1609. The Tempest was written at the end of Will's career. Not half way through. And certainly not by an Earl who died before Will was writing for the indoor theatre, in the Romantic genre, for the taste of a Jacobean audience about which The Earl can have known nothing.