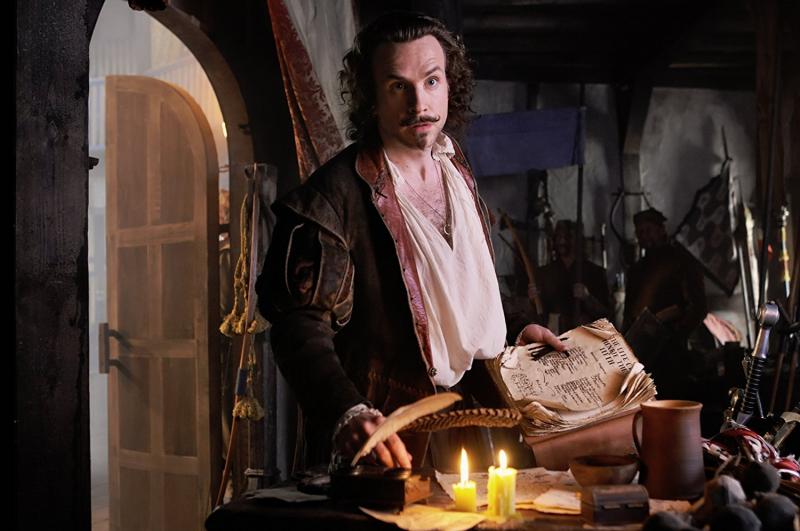 ROLAND EMMERICH’S film “Anonymous,” which opens next week, “presents a compelling portrait of Edward de Vere as the true author of Shakespeare’s plays.” That’s according to the lesson plans that Sony Pictures has been distributing to literature and history teachers in the hope of convincing students that Shakespeare was a fraud. A documentary by First Folio Pictures (of which Mr. Emmerich is president) will also be part of this campaign.

The case for Edward de Vere, 17th Earl of Oxford, dates from 1920, when J. Thomas Looney, an English writer who loathed democracy and modernity, argued that only a worldly nobleman could have created such works of genius; Shakespeare, a glover’s son and money-lender, could never have done so. Looney also showed that episodes in de Vere’s life closely matched events in the plays. His theory has since attracted impressive supporters, including Sigmund Freud, the Supreme Court justice Antonin Scalia and his former colleague John Paul Stevens, and now Mr. Emmerich.

But promoters of de Vere’s cause have a lot of evidence to explain away, including testimony of contemporary writers, court records and much else that confirms that Shakespeare wrote the works attributed to him. Meanwhile, not a shred of documentary evidence has ever been found that connects de Vere to any of the plays or poems. As for the argument that the plays rehearse the story of de Vere’s life: since the 1850s, when Shakespeare’s authorship was first questioned, the lives of 70 or so other candidates have also confidently been identified in them. Perhaps the greatest obstacle facing de Vere’s supporters is that he died in 1604, before 10 or so of Shakespeare’s plays were written.

“Anonymous” offers an ingenious way to circumvent such objections: there must have been a conspiracy to suppress the truth of de Vere’s authorship; the very absence of surviving evidence proves the case. In dramatizing this conspiracy, Mr. Emmerich has made a film for our time, in which claims based on conviction are as valid as those based on hard evidence. Indeed, Mr. Emmerich has treated fact-based arguments and the authorities who make them with suspicion. As he told an MTV interviewer last month when asked about the authorship question: “I think it’s not good to tell kids lies in school.”

The most troubling thing about “Anonymous” is not that it turns Shakespeare into an illiterate money-grubber. It’s not even that England’s virgin Queen Elizabeth is turned into a wantonly promiscuous woman who is revealed to be both the lover and mother of de Vere. Rather, it’s that in making the case for de Vere, the film turns great plays into propaganda.

In the film de Vere is presented as a child prodigy, writing and starring in “A Midsummer Night’s Dream” in 1559 at the age of 9. He only truly finds his calling nearly 40 years later after visiting a public theater for the first time and seeing how easily thousands of spectators might be swayed. He applauds his art’s propagandistic impact at a performance of “Henry V” that so riles the patriotic mob that actors playing the French are physically assaulted. He vilifies a political foe in “Hamlet,” and stages “Richard III” to win the crowd’s support for rebellious aristocrats.

De Vere is clear in the film about his objectives: “all art is political ... otherwise it is just decoration.” Sony Pictures’ study guide is keen to reinforce this reductive view of what the plays are about, encouraging students to search Shakespeare’s works for “messages that may have been included as propaganda and considered seditious.” A more fitting title for the film might have been “Triumph of the Earl.”

In offering this portrait of the artist, “Anonymous” weds Looney’s class-obsessed arguments to the political motives supplied by later de Vere advocates, who claimed that de Vere was Elizabeth’s illegitimate son and therefore the rightful heir to the English throne. By bringing this unsubstantiated version of history to the screen, a lot of facts — theatrical and political — are trampled.

Supporters of de Vere’s candidacy who have awaited this film with excitement may come to regret it, for “Anonymous” shows, quite devastatingly, how high a price they must pay to unseat Shakespeare. Why anyone is drawn to de Vere’s cause is the real mystery, one not so easily solved as who was the true author of Shakespeare’s plays.

James Shapiro, a professor of English at Columbia, is the author of “Contested Will: Who Wrote Shakespeare?”
Disqus comments
Disqus

Per "New Shakespeare film ruffles academic feathers,'' Jocelyn Noveck, Associated Press, Oct 27, 2011 http://news.yahoo.com/shakespeare-film-ruffles-academic-feathers-105538… : "I don't have a problem with Roland Emmerich drinking the Kool-Aid," says Columbia's Shapiro. "But when he serves it to kids in paper cups, I do."

Just a stupid point but

Just a stupid point but probably quite funny for anyone who despises that historic failure Anonymous. If anyone is any doubt that Ronald Emmerich KNOWS NOTHING about theatre, that Derek Jacobi is a pretentious airhead, consider...

I, like many others, couldn't wait to watch Anonymous and begin ripping it apart, piece by historically inaccurate piece... but even I didn't expect for the nonsense to begin quite so fast.

No sooner than the opening shots of the movie, we see Derek Jacobi (forevermore the Judas of Shakespeare) rushing from his taxi outside a crowded Broadway theatre, rushing through the wings, rushing er, right out onto the stage?? Erm... no make-up, no costume, no WARM-UP? I think it's safe to say Derek Jacobi - a classically trained actor - DID in fact warm up, probably right before they filmed that very scene (serious theatre actors have to project their voice and in order to do this they must loosen their vocal chords "...ma-me-may-mo-ma-me-may!" It's like running 100m without stretching - even it it were, somehow, true, it is HIGHLY unprofessional and definitely NOT cool.

But hey, us Shakespeareans are not pedantic (despite what Oxfraudians believe) and let us grant some actors have a bad day and genuinely are late to work through no fault of their own.

When the rain (cue Frank Sinatra) begins to pour and Derek Jacobi opens his umbrella (Wow! Isn't that clever? At first I didn't understand WHY he had the umbrella but now I see... oh wait, they STOLE THAT FROM MINORITY REPORT. Just because it's sci-fi doesn't mean no-one will think you stole the idea Ronald...)  we left with another glaring error in theatre management to anyone who has actually ever stepped foot backstage: NO ACTORS. EVER. TAKE. PROPS. OUTSIDE. It is kind of the golden rule for the prop department. A serious Broadway theatre like the one depcited requires an investment of 10's perhaps even 100's of millions of dollars (especially if you want fake rain storms on stage) and the notion Derek Jacobi would simply be allowed to wander off the property with the umbrella or perhaps just use his own - let alone wear whatever he happened to put on that morning - is, quite frankly, ridiculous.

Does Ronald really think this shabby entrance is making his case more credible? I know they think it looks cool because this is the era of MTV and Justin Beiber where punctuality is second to style and and rudeness is a virtue. I know they wanted to portray this star as 'too cool for school' but come off it; serious actors do not play those sorts of games, even as serious scholars do not believe the case for misappropriated authorship. By telling the story in this way, Emmerich betrays his vainglorious ignornace.

So there you have it: 60 seconds into the movie and it's clear the film-makers know absolutely nothing about the way a modern theatre - let alone Elizabethan - is run.

ps. Anonymous the word itself is used as a word to designate written works for whom there is no attributed author. It can only be used in one of two ways; either it is simply used instead of a blank space or the author may deliberately wish to conceal his identity entirely. This film should have been called Pseudonym. The term 'anonymous' doesn't come into it. At all. In any way. Saying "Oh, but everyone knows what they mean..." is a massive fail; may as well have called it Irregardless for all the sense that makes. I know I am nit-picking, but if you are going to make a play about the greatest literary genius of all time, I think the very least you should achieve is a grammatically correct title.

Hi King's Ruin. Actually, it should have been called 'Allonym'.