The end is nigher 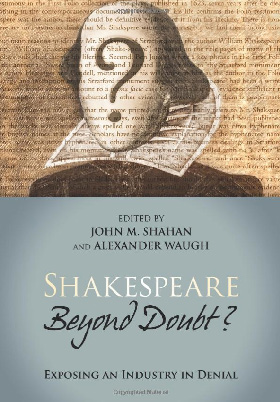 We may finally be approaching the end of the Oxfordian supremacy in the authorship debate. Not a moment too soon both for people who are serious about Shakespeare's work and those who have been arguing Will's case with De Vere's champions.

This book is a hasty, largely recycled response to Shakespeare Beyond Doubt: Evidence, Argument, Controversy. The new book, like the ideas within it, is shabbily produced. Many of it's 'chapters' are merely reproductions of bits of rebuttal of The Shakespeare Birthplace Trust's 60 minutes. As Oxfordians missed the point of that exercise completely, the extracts, shorn of all context, now look like intemperate, feeble-minded graffiti.

The book, like many 'vanity' publishing exercises, is poorly printed and the cover design and typography are such close imitations of the CUP book that the publishers must be relying either on the lethargy of CUP's lawyers or the insignificance of this Oxfordian enterprise to help them a avoid spot of the old-fashioned English legal aggro that Will himself used to enjoy.

CUP's book was itself a relatively rapid academic response to the widespread publicity that the 2011 film Anonymous attracted to the 'Shakespeare Authorship Question'. Two years for publishing and preparation counts as indecent haste in academic circles. In almost the first scene of that film, set in 1598, we see a Jonson play on stage (before any Shakespeare plays have been performed) with Marlowe in the audience. This is a bit like a history of Rock Music, showing Elvis Presley, recording Imagine with The Rolling Stones in 1964 with Buddy Holly producing. Nonsense.

The producers did not intend to make Oxfordianism look quite so ridiculous but their difficulty in turning Oxfordian theory into a coherent story reflects the inability of Oxfordians themselves to come up with a coherent theory. This book is a combination of smoke and mirrors, discredited argument, misdirection, guesswork, supposition and special pleading, all designed replace facts with mountains of inference and sophistry. Facts about Will's life may be meagre but they are nonetheless facts. Plural. In 90 years of solid effort, Oxfordians haven't been able to come up with a single fact connecting Oxford to the work.

Like a number of recent Oxfordian publications, the book disingenuously fails to fly the Oxfordian colours at its masthead. This is normally done to enable authors to cast doubt on Will's authorship whilst bypassing the all the obviously indefensible nonsense used to support Oxford's candidacy. Ironic that the film of the debate, Anonymous, should cause Oxfordians to support De Vere anonymously, isn't it? But in spite of the vacancy on the flagstaff it turns out to be the usual suspects in the same old leaky tub, flying the Jolly Roger.

The 21 points of doubt in the preface are the usual Oxfordian, "don't look there, look here" sleight of hand. Item 1 on the list of '21 Good Reasons to doubt that Shakspere was Shakespeare' is designed to be wholly misleading and avert unwary eyes from a stack of evidence. Internal evidence like Will's use of his own name in the sonnets, scenes featuring a character called Will in the plays, one born in the Forest of Arden, another learning Latin from a Welsh tutor in a grammar school as Will did. It ignores external evidence like The Passionate Pilgrim Dispute, The Groatsworth of Wit, Francis Meres and the dozens of eulogies like those of Leonard Digges, which closely tie the work to the man from Stratford.

It is a type of statement which Oxfordians often make which is neither truth, nor evidence, merely a dance step on the far perimeters of plausibility, aimed at raising dust and smoke to conceal the obvious. Numbers 2-21 are all just as agenda-centric, just as misleading, just as bad.

The book does not explain how an Earl who died in 1604 was collaborating with a dramatist he could not have met, ten years later, writing in a genre that developed after his death, for a type of theatre he never saw. It does not explain how his lifetime rival, Ben Jonson, came to call him the Swan of Avon or why Will made bequests to actors he worked with all his life. It does not explain why Oxford published Venus and Adonis and The Rape of Lucrece pseudonymously when the quality and success of this work would have brought him the return to court he was so earnestly and unsuccessfully seeking by other means.

While making much of the aristocratic background required to produce the history plays, it does not explain why Shakespeare's work contains such a warped picture of court life and why it cannot be distinguished from very similar history plays written by Marlowe, another commoner, another grammar school kid with the same restricted access to court as Will. It makes huge claims for the quantity of elite knowledge in the plays without producing examples of anything that Will could not have learnt in Stratford or London.

And so on and on. All the same arguments, confidently regurgitated but just as ridiculous as ever.

In short, it does not explain why the work was not written by the man known to his theatre colleagues, his publishers, his family and his friends as the playwright, Shakespeare. Not unless you are willing to close your eyes to history, reason and logic.

And worse than all of that, it is dull as ditchwater.

If you want to spend some of your hard-earned on an authorship book, Ros Barber's The Marlowe Papers: A Novel is entertaining, well written, massively more plausible and, as far as the authorship debate goes, it focusses on the coming man.