However, whilst it is chiefly intended to provide insight into Elizabethan collaborative theatre techniques, because of the central subject matter, it is also one of the first major academic works to cover many attribution and authorship arguments which have been the property for years of the so-called Shakespeare Authorship Question.

The idea that Will used his inkpot in more plays than those which bear his name is not new. Leonard Digges gives us an idea of how the process worked in his long Preface to the Second Folio. This work is part of a new approach to open up the Elizabethan and Jacobean theatre workshops and take the closest look so far at what goes on inside, though the focus is entirely on the collbaorative plays on which Will does not currently have his name.

The play-texts are clear, nicely typeset and the footnotes are exemplary, far enough from the dialogue not to interfere with reading but clear and well-set enough to make reference easy when necessary. Although the texts all pass the basic scholar's test, the plays are edited for performance, with as much detail as possible concerning who is on stage, when they enter and exit. Spelling and grammar are uncompromisingly modern (thank God). If there are complaints, they won't be from actors or directors. 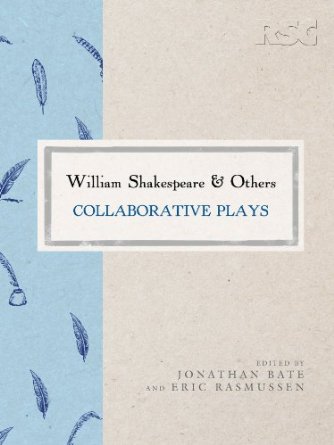 The people who are going to struggle most with Bate and Rasmussen's approach to Collaborative Authorship are the Shakespeare Authorship Gladiators, who hardly get a mention.

For this is nothing less than a reboot of the whole Authorship Question with all the idiotic, worthless controversy removed. All the toys are here; stylometry, close textual analysis, intertextuality, verbal idiosyncrasy but now they are being used in the big boy's playground. Veteran anti-Stratfordians have long been complaining about a hidebound academia, closed to new ideas, mired in orthodoxy and, daftest of all, in thrall to the Stratford Tourist Industry. But here we have frontline academics addressing Robert Greene (talking about Shakespeare - no concessions) and discussing Hand D (fully authenticated - no concessions). Elliot and Valenza feature, though are not relied on, Macdonald P Jackson is extensively quoted, and why not. But if you're looking for Bacon, Looney or Ogburn in the index, you are wasting your time.

Whilst there is little argument that is entirely new, the techniques of attribution are far from naive or superficial. Sticking with Hand D, the authors (there are six of them) baldly state the paleological case relating to the signatures, summarising early and late work by Chambers and Jackson and then put a large chunk of the work under your nose.

Grant them removed, and grant that this your noise
Hath chid down all the majesty of England;
Imagine that you see the wretched strangers,
Their babies at their backs and their poor luggage,
Plodding to th' ports and costs for transportation,
And that you sit as kings in your desires,
Authority quite silent by your brawl,
And you in ruff of your opinions clothed;
What had you got? I'll tell you: you had taught
How insolence and strong hand should prevail,
How order should be quelled; and by this pattern
Not one of you should live an aged man,
For other ruffians, as their fancies wrought,
With self same hand, self reasons, and self right,
Would shark on you, and men like ravenous fishes
Would feed on one another.

Ouchy ouch! Was this written yesterday? This is a play about human rights and even worse for the Oxfordian sect of Shakespeare Deniers, it's about who has them. Does everyone have them? Do the pitiful immigrants from religious wars abroad have them? And when you get to the last eight lines we have a savage criticism of Machiavellian ends justifying the means. We are all human and we demean ourselves by denying human rights to others. If an Earl wrote that I'll get Professor Bate to eat a top Oxfordian hat (I can't myself. They contain nuts).

And there, wet and glistening in the penultimate line, is one of Will's signature moves, taking the strong noun "shark" and turning it into a transitive verb. A linguistic magic trick. And an amazing sentiment.

No wonder it was never performed. There are places you will have trouble getting it performed today. Which is, of course, probably the main reason it survived. In its glorious 500 year history, English theatre (and broadcasting) hasn't always been top of the class when it comes to preserving for posterity. Stuff that was used every day was allowed to wear out.

It may seem disingenuous to give such a one-sided review of the attribution debate, yet all the credible counter evidence is there. The uncountable mass of less-than-credible evidence is simply ignored. The authorial voice throughout the book is neither insistent nor combative. There's no SAQ brio or animus and I do not think that there will be many sales to anti-Stratforidans. If this is to be the new game of authorship studies, they have no cards and no stakes. They can't play. There appears to be no aristocratic DNA in the new genome at all. Anyone starting here should, however, be impossible to derail into anti-Stratfordianism.

The anti-Strats have been begging for years for English Faculties to take authorship studies seriously. Here is a new work which just does that, providing a foundation stone for the new genome of Elizabethan and Jacobean drama. Following this approach will hopefully enable scholars to track playwright DNA in playwright text.

My guess is that most people who are familiar with the SAQ will look first, like me, at familiar claims and arguments but I'm also sure, like me, they will be quickly diverted into reading the actual work. Arden of Faversham is a gripping and very unfamilar-feeling whodunnit, more Poirot than Revenge Tragedy. And Thomas More is a revelation and should be read by anyone who likes Coriolanus where the same issues arise in more muted form.

So the book is a success. Well-printed on hernia-weight paper (only the true poseur will take this on the tube), section-sewn and typeset. Although one or two bits have an early Ventura Publisher feel about them, it's a nice modern job, more handsome without its dust-jacket in its smart dark blue linen, well-suited to its intended market. A very fair price is asked and if I was asked to trade my entire collection of anti-strat authorship books for a copy of this, I wouldn't hesitate.

Authorship studies, if you play with the right people, is going to be a much more interesting game from now on.