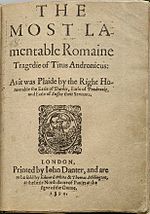 First official record: Philip Henslowe's diary, 24 January 1594, where he records seeing the play "titus & ondronicus" at The Rose.[63]
First published: published in quarto in February 1594 as The Most Lamentable Romaine Tragedie of Titus Andronicus, the first known printing of a Shakespearean play (printed by John Danter for Edward White and Thomas Millington). The play was republished in 1600 (printed by James Roberts for White) and 1611 (printed by Edward Allde for White). The Folio text appears under the title The Lamentable Tragedy of Titus Andronicus.
First recorded performance: on 24 January 1594 performed by Sussex's Men at The Rose, as recorded in Henslowe's diary.[64]
Additional information (attribution): Titus is most likely a collaboration between Shakespeare and at least one other dramatist, probably George Peele.[65][66][67][68]
Evidence: E.A.J. Honigmann dates the play 1586, arguing it to be Shakespeare's first piece, written several years prior to his arrival in London.[69] In his 1994 edition of the play for the New Cambridge Shakespeare, Alan Hughes makes a similar argument, suggesting a date of 1588.[70] Most scholars, however, tend to favour a post-1590 date, although there is by no means a consensus amongst them as to what that date may be. In his introduction to the 2001 edition of the play for the New Penguin Shakespeare (edited by Sonia Massai), Jacques Berthoud argues for a date of 1591;[71] in his 1984 edition for the Oxford Shakespeare, Eugene M. Waith argues for a date of 1592;[72] in his 1995 edition for the Arden Shakespeare, Jonathan Bate argues for a date of 1593.[73] What is known is that the play is unlikely to have been written later than June 1592, as that was when the London theatres were closed due to an outbreak of plague. Additionally, stylistic analysis has shown that Titus belongs to Shakespeare's pre-plague group of plays.[74] If it is assumed that the Henry VI trilogy was complete by March 1592 at the latest, it would suggest Titus was composed either immediately afterwards, or perhaps simultaneously as he was completing them, suggesting a date of late 1591/early 1592.[74]

The Countess of Pembroke

Persuasion If I could save two of my books from a conflagration, one of them would be Persuasion by Jane Austen. One of the greatest novelists of the 19C and an unsurpassed prose stylist and satirist. Although Austen used her own… go to article