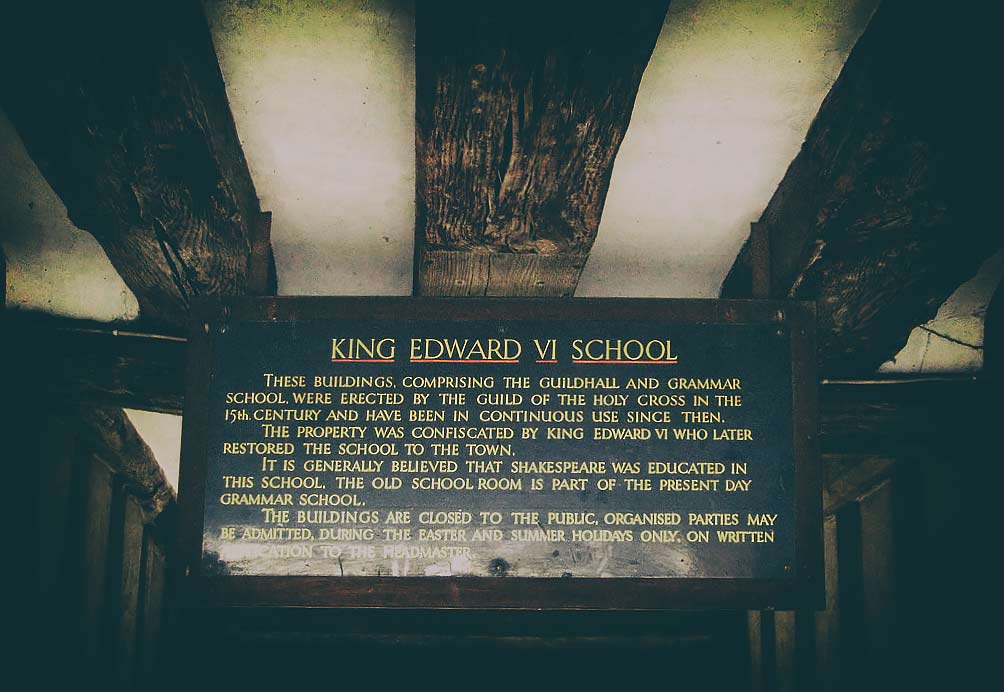 Okay, Joan, you asked for this. Roger, are you paying attention? Here is a terse summary.

The principal sources of primary education in England since the Middle Ages were the monasteries until Henry VIII closed them. Realizing that a literate class was needed to provide the basic underpinnings of civilization, secular grammar schools began to be opened in their place. Henry opened some, but Edward VI opened many more in communities around England, and Elizabeth continued. A secondary motivation was the protestant belief that people should be able to read and understand the Bible without having to have a priest or some such as an intermediary. The number of literate people burgeoned, and toward the end of Elizabeth’s reign people like Francis Bacon, an advocate of education, began to be concerned that too many people were becoming literate, even though the proportion of literate people was pretty low by modern standards. Bacon felt that more people were becoming literate than there were jobs requiring such skills, and that in turn could be a cause for unrest.

Stratford’s King’s New School was chartered by Edward in 1553, replacing an older one that had been in existence for around two centuries. School masters were paid £10, £20, or £30 per annum depending on the school. Only a few of the elite schools paid the highest rate, but Stratford paid £20, placing it among the better payers. The master was also provided with rent-free lodging. Out of his £20, the master was expected to pay for needed maintenance and also pay the wages of an usher, the person who taught the petty school where young scholars spent their first years learning the catechism, how to read then write in that order as separate subjects, and the Latin accidence .before moving on to grammar school under the master. It is estimated that without the assistance of an usher, around 50% of the master’s time would have to be employed teaching the petty school subjects.

Saying that Tudor grammar schools were secular is a bit misleading, both because one of the subjects was the catechism, and because masters, besides being university graduates, needed to be approved by regional ecclesiastical authorities. One of a master’s duties was to march students to church on Sundays and question them on their understanding of sermons afterwards.

Stratford town records give us the names of its grammar school masters. One of them, John Brownsward, was highly praised in print for his Latin poetry and also for his teaching skills in Progymnasmata quaedam Poetica (1589) by Thomas Newton. He was recognized for his Latin poetry by Francis Meres in his Palladis Tamia: Wits Treasury (1598) (as Brunswerd) on the same page as both Shakespeare and de Vere were praised for comedy—as separate people. The master during what was probably Shakespeare’s most important grammar school years was Thomas Jenkins. Because of his Welsh name, some think that he may have been the model for Sir Hugh Evans, the Welsh-accented school master in The Merry Wives of Windsor who quizzes young William on the meaning of “lapis” using an elementary form of the standard grammar school translate and retranslate technique. It isn’t known if Jenkins, the son of a servant in London had a Welsh accent, but it is known that the son of one of the other servants in the same household was named Evans. Probably a coincidence.

The grammar school curriculum, made standard throughout England, was heavily influenced by the humanist tradition espoused by Desiderius Erasmus, the Dutch philosopher and close friend of Henry VIII’s. The core was an amalgam of grammar, logic, and rhetoric called the trivium (see https://en.wikipedi…). John Bretchgirdle, Vicar in Stratford from 1561 until his death in 1565 (he may have baptized Shakespeare) had once been a school master in Witten in Cheshire. Of grammar school curricula, he wrote: “I will the children learn the Catechism and then the Accidence and Grammar set out by Henry VIII, or some other, if any can be better, to induce children more speedily to Latin speech; and then Institutum Christiani Hommis, that learned Erasmus made; and then Copia of the same Erasmus, Colloquia Erasmi, Ovidius Metamorphoses, Terence, Mantuan, Tully, Horace, Salust, Virgil, and such other as shall be thought convenient.” A surviving letter written in very good Latin by 11 year old Richard Quiney, Jr. (1598), son of the same Richard Quiney who wrote a letter to Shakespeare that same year, shows that Cicero was also studied in Stratford. Bretchgirdle’s statement of curriculum was a subset of that widely used in England, and is worded similarly to other surviving curricula.

Most important was Erasmus’ de Copia, or Copia: Foundations of the Abundant Style (https://en.wikipedi…). It was “for teaching how to rewrite pre-existing texts, and how to incorporate them in a new composition. Erasmus systematically instructed on how to embellish, amplify, and give variety to speech and writing” (from the Wikipedia article). Selected chapters from de Copia (in English) can be found here (http://blogs.iac.ga…). Perhaps the most interesting chapter is 33 (the last one in the linked to extract) in which 195 variations of the sentence, “Your letter has delighted me very much”, are given. An objective of a Tudor grammar school education was to produce students capable of eloquent writing; i.e. having an abundant style. Anyone who has paid attention to what Shakespeare did as a playwright should recognize that Erasmus’ de Copia was probably where he got his first serious lessons in what became the cornerstone of his life’s work.

Many people have said that a Tudor grammar school education was the equivalent of a college education today.

There are numerous readily available sources for the information above, but the gold standard of Tudor education studies is T. W. Baldwin’s William Shakespere’s Small Latine and Lesse Greeke (1944) which can be read here (http://franklin.pre…). In response to John Churton Collins, an Oxford advocate, Baldwin writes: “I know of no evidence to justify the conviction of Collins that Shakspeare’s “knowledge of the classics both of Greece and Rome was remarkably extensive.” Remarkably extensive it may appear to us, but so far as I can find it was only that of a grammar school graduate who had an interest in the literary side of certain Latin classics.” He further states that “no miracles are required to account for such knowledge and techniques from the classics as he exhibits. Stratford grammar school will furnish all that is required.”

Another source that some may find interesting is David Cressy’s Education in Tudor and Stuart England (1975). Aside from a minimal amount of commentary by Cressy, the book reprints numerous contemporaneous writings about many aspects of education in early modern England. Among other things, that is where Bacon’s concern about the possibly that there could be too many literate people was found.

People who believe that someone other than the glover’s son from Stratford wrote the works bearing his name need very much to first eliminate Shakespeare from the picture. As long as he is in the running, competitors have little chance of success. Their case isn’t helped by the (almost?) total absence of concrete evidence supporting any of the 80+ alternates. What they have is weakly circumstantial evidence, ephemera, plus lots of conjectural arguments. That is why so much attention is paid to trying to knock Shakespeare off his pedestal. Much more time is spent on that than boosting their own candidates. Education is one of the pillars they try to eliminate. Like a lot of things about Shakespeare’s era, we know less about Tudor education than we would like, but we also know a lot more than many people appreciate. If nothing else gets communicated by this little note, it should be that blanket statements about how poorly educated grammar school students were back then, especially Shakespeare, are being made by people who haven’t done their homework.