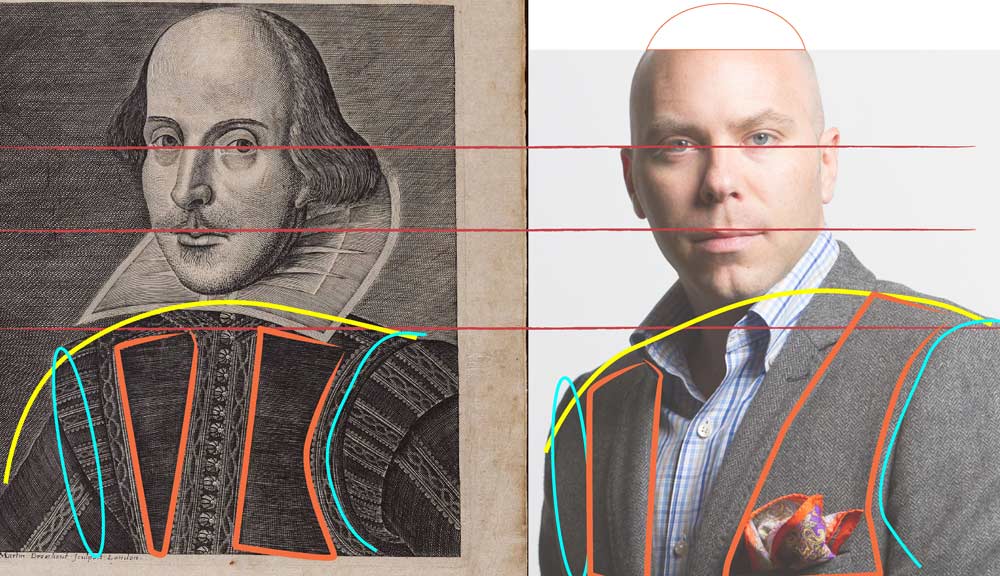 There is nothing suspicious, nothing indicative of alternative authorship or suggestive of misdirection, and in truth, not much at all wrong with the Droeshout engraving of Shakespeare. Jonson is using no more than a clichéd sentiment, common to many eulogies, indicating that the strength of Shakespeare's achievement can only be understood from his work, not monuments or portraits. In fact, if you can imagine for a second that Jonson was rather pleased with the engraving (and looking at other frontispieces, it's not hard to understand why), it all makes much better sense than the rococo interpretations that doubters use to infer the uninferrable. Similar eulogies and examples of much worse engraving can be found effortlessly with Google.

And Coleridge? Well someone paraphrased him, calling this kind of reasoning "the evidence hunting of an evidence-free malignity". I think it might have been me.

Meanwhile, in the fourth week of a MOOC purporting to promote critical thinking, Barber has her learners looking for hidden clues in the stitching on a 400-year-old engraving.

Whatever you call that, you can't call it scholarship. Or critical. Or thinking.

Barber fills three videos with this infantile nonsense. THREE! "So why didn't the publishers of this expensive 900-page Folio volume - a book it would cost two-thirds of a school-teacher's monthly salary to buy - reject this crude and bizarre portrait as a suitable adornment for their publication? " demands Barber, expecting to start another inquest. The answer is because it is neither crude nor bizarre. Obviously. Grow up.

There's no more to say.

Mike, Thank you for the visual illustration of the engraving and the photo alongside it. It is exactly how I interpreted the angle and attempt at perspective. It is not something I think I could try to explain in words should I ever have the misfortune to be engaged in such a conversation again. I only regret the time I spent in the furtherance of avoiding any confirmation bias by watching a contorted and unconvincing you tube video proposing something different by someone unable to overcome their own.

It appears to me: The back and front arms seem to say there is someone else hidden in the picture. The crescents under the eyes are saying moon. The Shiny patch on the forehead is saying it is daytime. It says 'day'. The shadow at the side of the head, that was soon after added to the portrait, is re-enforcing daytime, it says 'day'. Moon and day. The embroidered borders of the tunic form three letters. A large 'M' across the whole chest. An 'n' is formed by the right side of the 'M'. A 'Y' is formed from the neck down. A 'D' is formed by the D shaped collar. It's not a shield, it's a large letter D. Thus M N D Y. So, if I'm correct, who could it be?

Now we're not quite sure whether Anthony Munday is making a personal or an impersonal claim to have written the canon or just speaking up for the Bankside playwright who once worked for Oxford. Perhaps Dr Barber could sort it into the correct one of her categories. We'll have no peace of mind until she does.