In an email received in the early days of Oxfraud, only a year ago, Roger Stritmatter warned me that 2013 would be a significant year in the SAQ debate as he was going to publish a book which would revolutionise what he called 'Tempest Studies'.

The book, co-authored by Lynne Kositsky, arrived in summer but although many large claims were made, none were taken seriously by the Academy and the book has yet to make the smallest ripple on the surface of Shakespeare scholarship. The enterprise fell well short of its objective, which was to loosen the moorings of The Tempest at the end of Shakespeare's career, in the forlorn hope that this would, in turn, fortify the claim that no plays were written after the death of the Earl of Oxford.

There were a variety of of online tempests in the blogosphere, however. Old issues and arguments were revived, old battlegrounds were revisited, rebuttals were rebutted time and again and The Tempest has become the most referenced play in the debate.

This summary provides a guide to Tempest studies, the year 2013, and how it failed to live up to Oxfordian expectations.

If you are feeling mischievous, you can buy Roger and Lynne's book and contribute to both sides of the debate at the same time by using this link.
There are a lot of positive reviews and a lot of positive comments by fellow Oxfordians, though they are not all spontaneous. Many of upvotes and compliments are written in response to Roger's direct invitations to help the cause made elsewhere on the net. A game known as 'Pimp my Reviews'.
Unfortunately, despite a promised revolution in 'Tempest Studies', so far the book has been received with deafening silence, without a single response of any kind from academics involved in Tempest scholarship. There are two separate reviews on Oxfraud which will give you an idea why no one took any notice of their claimed redating initiative.

This book is not about The Tempest. Not a word of it. It’s all about Stritmatter and Kositsky’s desperate need to claim the great prize of its authorship for the god of their idolatry: a tragic, unacknowledged genius whose apotheosis their book will bring about. His name? Roger Stritmatter, Lord of Coppin.
Oops! Sorry. Edward de Vere, Earl of Oxford.
Whose name is demurely absent from their text, save once. Not in their own words but in Gail Kern Paster’s: which are by far the best thing in the book:
...much worse than professional disclaimers of interest in Shakespeare’s life is the ugly social denial at the heart of the Oxfordian pursuit ... a ferociously snobbish and ultimately anachronistic celebration of birthright privilege.

An Anti-Stratfordian Tour de Farce
Although an intensely irritating waste of paper, despite appearances, there is a purpose in this type of publication.
Books like these are published to be cited in SAQ discussion. If they find themselves unable to explain why The Tempest is associated with Hallowmas rather than Shrovetide, Oxfordian can say. "Have you read my book on The Tempest" or "Have you read Stritmatter and Kositsky's book on The Tempest?" It's usually said with a patronising snort, implying both that the matter has been dealt with definitively and whoever they are arguing with is poorly read on the subject.
In other words, the book is intended to be cited for what it set out to achieve, rather than what it actually says.

There are four articles on Oxfraud which discuss the sources of The Tempest. One is reproduced from The Shakespeare Authorship Site with kind permission of the author, David Kathman, another, the long article discussed extensively in the book, is from our own Tom Reedy and there are two more Oxfraud articles.

This article was written in the heat of the Shakespeare Wars in the 1990's and Oxfordians have been trying, unsuccessfully, to rebut it ever since. David's Shakespeare Authorship site has more common sense per pixel than any other SAQ site on the net.

This article dissects the claim that WIll could not have seen Strachey letter item by casuisitical item and makes a detailed comparison between the text of the letter and the text of The Tempest.

In a discussion of the book with its authors in a Guardian comments section, it became clear that neither author had considered Donne's 1597 poem "The Storm" as a possible source or even knew of its existence.

Internal evidence suggests that Alasdair Cooke may not have written this but it graphically recreates the moment Oxfordians first decided to address the Strachey Letter. 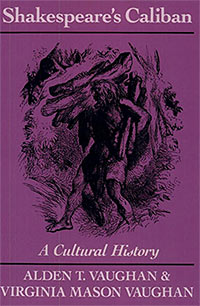