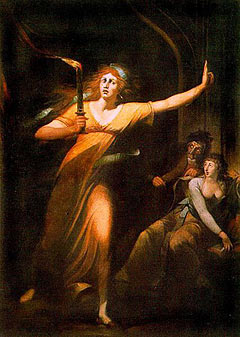 Macbeth is a Jacobean play, through and through.

It celebrates the accession of James VI & I, and his descent through a true line of  Scottish kings, foreseen to “stretch out to the crack of doom.” In the vision summoned by the witches to appall Macbeth, the distant heirs of Banquo carry “treble scepters”:  emblems of the kingship of England, Ireland, and Scotland.  Elizabeth I did not rule Scotland; her rival Mary, James’s mother did.  He sought the union of his realms.

Macbeth alludes to the policies and slogans of his reign:  Concord, Peace, and Unity.  Malcolm feigningly protests that he would “pour the sweet milk of concord into hell, /Uproar the universal peace, confound / All unity on earth.”It plays to his obsession with witches, the subject of his book Daemonologie (1597). 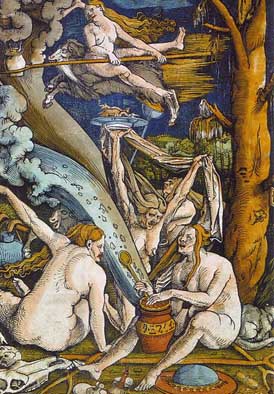 And above all, it speaks to a king and country still shivering from a near-apocalypse.  Had it come off, the Gunpowder Plot of November 1605 would have killed not only the King, but most of his succession; his Privy Council; the House of Lords, with the highest  judges of the realm, its prelates, and its aristocracy, along with the members of the House of Commons.  (That quantity of powder would probably have burned much of London to the ground as well.)

A medal struck in 1605 commemorates the king’s escape.  It shows a serpent lurking among lilies and roses, with the legend, Detectus qui latuit (that which was hidden is disclosed).  As Lady Macbeth says to her husband, “Look like the innocent flower, but be the serpent under’t.”

Among the Gunpowder conspirators was Father Henry Garnet, the Jesuit Superior in England.  Though his part in the conspiracy was passive—he heard of it under the seal of confession and kept silence—he was hanged, drawn, and quartered with the rest.  His trial in March 1606 made “equivocation” a buzzword.  To equivocate—to speak one thing with another “secret meaning reserved in ... mind”—was seen as the quintessence of Jesuitical snakiness.  Shakespeare’s hell-porter made black comedy of it:  “Faith, here’s an equivocator, that could swear in both the scales against either scale; who committed treason enough for God's sake, yet could not equivocate to heaven.”

An afterthought?  No.  Equivocation permeates the play from its first words:  “Fair is foul and foul is fair...”

The Earl of Oxford died in 1604.  His last, feeble conspiracy, in 1603, was against the accession of James VI to the throne of England.

Unequivocally, he did not write Macbeth.