The best among us??

The best among us??

Despite the oft-quoted extracts from Francis Meres and George Puttenham, no one has ever actually claimed that Oxford was a playwright outside the heated confines of the authorship debate.

Francis Meres made one mention of Oxford in Palladis Tamia, listing Oxford as 'the best for comedy' amongst several writers, some of whom, like Dr Gager, we know little about.

This might be conclusive evidence that he wrote some comedy or interlude for the courts if Meres were a modern writer but praise for the artistic efforts of aristocrats, from whom all patronage emanated, was de rigueur in the 16C. However catastrophically awful these efforts might be, saying nice things about the talent of the aristocratic writer could unlock a favour or two. Flattery could get you everywhere. 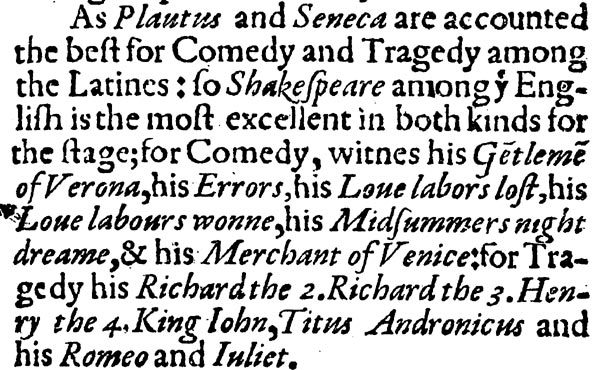 Futhermore, it's actually quite hard work discovering examples of the work some of the other 'poets' Meres lists with Oxford.  Not so difficult to find the work of those authors listed with Shakespeare as a playwright, however. Shakespeare features in all of Meres' lists* and he gives the titles of 12 of his plays, a fairly comprehensive list at the time of writing.  No mention of plays like Hamlet, Lear and The Tempest which Oxfordians want to move back in time.

No mention of any Oxfordian titles.

Because there are none.

And if Oxford was really the 'best' at anything, we'd find Meres laying on the praise with a trowel somewhere. A bit like this: "As the soule of Euphorbus was thought to live in Pythagoras : so the sweet wittie soule of Ovid lives in mellifluous & honytongued Shakespeare, witnes his Venus and Adonis, his Lucrece, his sugred Sonnets among his private frinds, &c."

In other words, Meres' evidence not only fails to link Oxford to Shakespeare's plays but conclusively identifies Shakespeare as the source of top quality sonnets. Even more distressingly for Oxfordians, his list of Shakespeare's plays up to 1598 spells doom and disaster for alternative dating schemes. If Will had written Hamlet or Macbeth or Coriolanus before 1598, Meres would have mentioned one or all of them. True, he misses two out but no one is perfect and he would hardly have left out any of the masterpieces Oxfordians are trying to move back in time.

Furthermore, it clearly identifies the two men as individuals, not one man with two names. There, down the same drain, goes the pseudonym theory.

Oxfordians cleave to Meres as one of only a handful of references which describe him as any sort of artist, yet he is so much more specific in his support for Will, in a variety of different ways, that they'd do better to forget him.

And as Horace saith of his; Exegi monumentum Ã¦re perennius; Regalique; situ pyramidum altius; Quod non imber edax; Non Aquilo impotens possit diruere; aut innumerabilis annorum feries &c fuga temporum: so say I severally of sir Philip Sidneys, Spencers, Daniels, Draytons, Shakespeares, and Warners workes;
As Pindarus, Anacreon and Callimachus among the Greekes; and Horace and Catullus among the Latines are the best Lyrick Poets: so in this faculty the best among our Poets are Spencer (who excelleth in all kinds) Daniel, Drayton, Shakespeare, Bretton.
As … so these are our best for Tragedie, the Lorde Buckhurst, Doctor Leg of Cambridge, Doctor Edes of Oxforde, maister Edward Ferris, the Authour of the Mirrour for Magistrates, Marlow, Peele, Watson, Kid, Shakespeare, Drayton, Chapman, Decker, and Benjamin Johnson.
… so the best for Comedy amongst us bee, Edward Earle of Oxforde, Doctor Gager of Oxforde, Maister Rowley once a rare Scholler of learned Pembroke Hall in Cambridge, Maister Edwardes one of her Maiesties Chappell, eloquent and wittie John Lilly, Lodge, Gascoyne, Greene, Shakespeare, Thomas Nash, Thomas Heywood, Anthony Mundye our best plotter, Chapman, Porter, Wilson, Hathway, and Henry Chettle.
… so these are the most passionate among us to bewaile and bemoane the perplexities of Love, Henrie Howard Earle of Surrey, sir Thomas Wyat the elder, sir Francis Brian, sir Philip Sidney, sir Walter Rawley, sir Edward Dyer, Spencer, Daniel, Drayton, Shakespeare, Whetstone, Gascoyne, Samuell Page sometimes fellowe of Corpus Christi Colledge in Oxford, Churchyard, Bretton.

The mouse tries to roar

This article occasioned the following demonstration of the pusillanimous Oxfordian art of Selective Quotation. Written on Shakesvere by John D Lavendoski, one of their top practictioners, it features a snippet in a screen shot rather than a link (which would enable his readers to see the rest of the article). Humour is not JDL's thing. Ask anyone who has endured the painful experience of him trying to be funny. But the irony of his cut, complaining we didn't include what Meres originally said, made just above a PMT extract from the actual book, is an example of how shockingly desperate Oxfordians have recently become for any hint of a smidgin of support, illustrating the poverty of the collection of magpie trinkets which now remain in their tatty nest. However, in deference to the limitless, literal, earthbound banality of their minds, I have altered the sentence to make it clear that it is the writers immediately adjacent to Oxford in the list who we know little about. 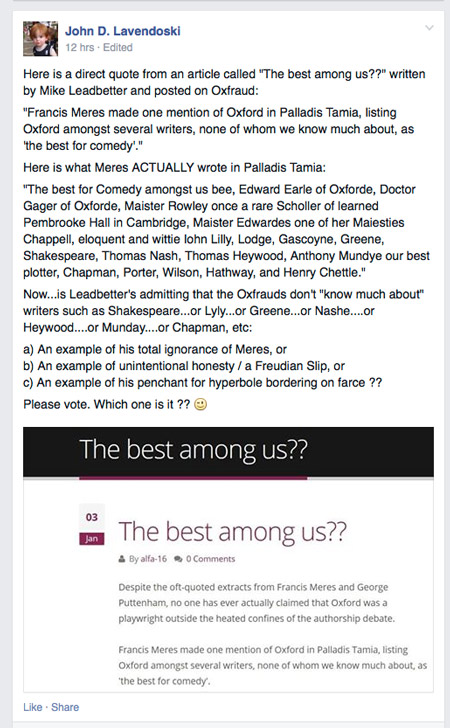