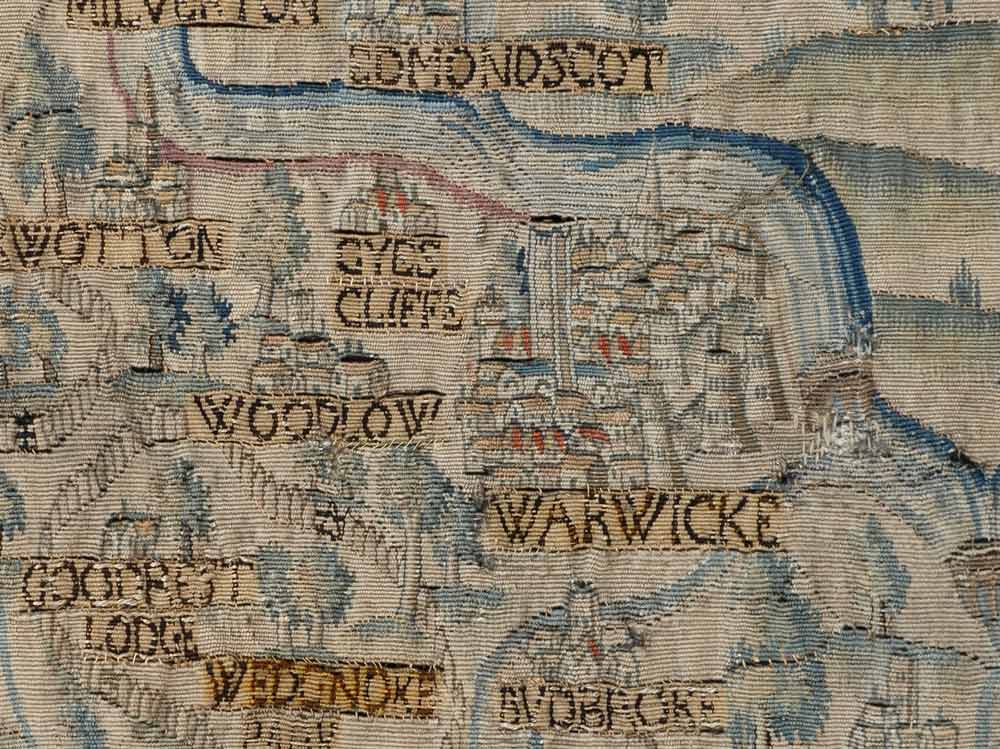 There are inescapable links between William Shakespeare and Warwickshire, even if the modern tourist industry isn't always academically scrupulous when it comes to describing them with accurate historical precision.

Before she gets down to the business of jumping to major conclusions, Barber's last task is to cleanse the connections to Warwickshire in the canon. Her tactic here does not involve finding a county that is a better fit. She does nothing to advance the cause of Essex or Kent. She simply settles down, again, to the tedious business of looking at each individual connection and hunting around for a plausible alternative explanation so she can jump to the smaller, usually entirely false, conclusion that the example or the evidence serves each side of the argument equally.

Contrarians reasoning thus see no need to build chains of evidence themselves or match them to the profiles of their own alternative candidates. They’re great believers in the magic Key to All Mythologies.

Disconnecting the plays from Stratford and Warwickshire involves a tedious process of disassembling links between the language, which contains references to places in Stratford, snippets of Warwickshire dialect, proper names from Shakespeare's neighbourhood and so on. These links have been uncovered by scholars down the ages but Barber is right to claim that they can be challenged by better research and alternative explanations. That is not what she serves up, however. Superficially, this is an easy job since she is not obliged to thread her alternative explanations into an argument which will have weight in the authorship balance. She's just trying to reduce the Warwickshireness of the plays to fool the bookies. So she sets off to find instances of Warwickshire dialect words in other parts of England. And of course she succeeds. It's impossible not to. Using this method, finding instances of French words in use in Newcastle and Truro, you could prove Diderot didn't speak French.

Actually, what Barber and the contrarian brigade are doing is ticking every box in a tour of the Cognitive Bias Codex. 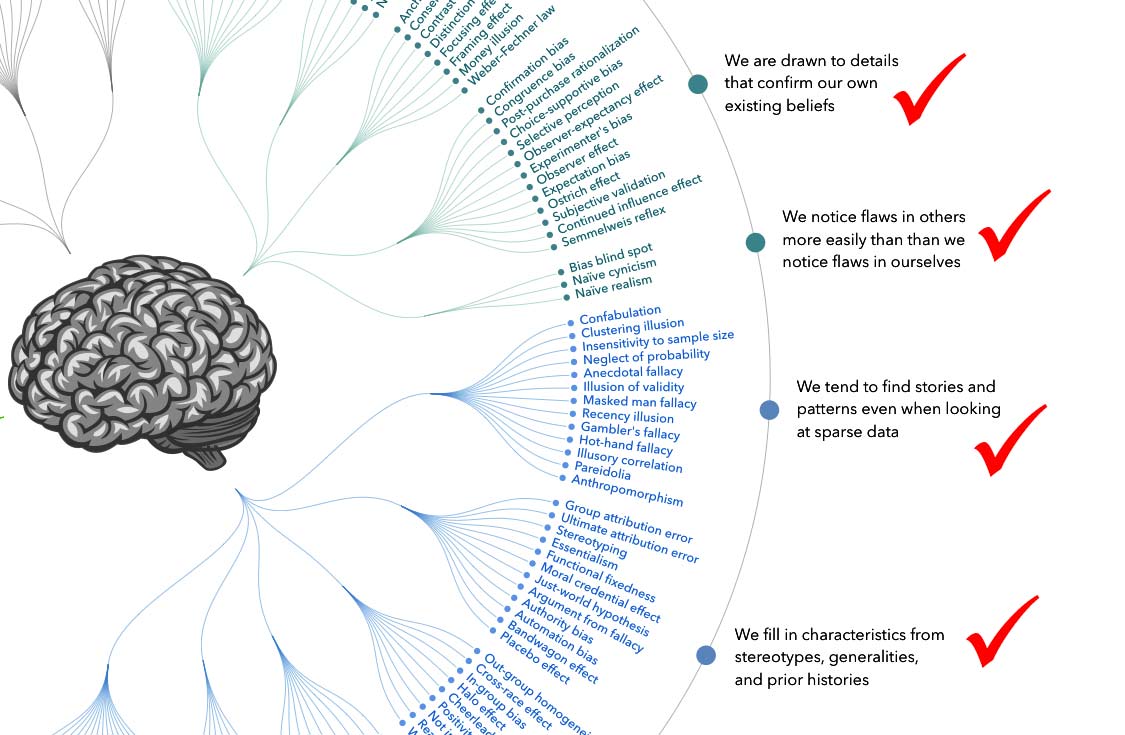 Let's accept her invitation and follow her attempted excision of a very popular reference to a very specific person in a very specific Warwickshire location. Marian Hacket, the fat alewife of Wincot.

First, let's look at how senior (and usually trustworthy) fellow Marlovian, Peter Farey, delivers the same information in his essay The Stratford References in The Taming of the Shrew by Peter Farey

There was a hamlet of Wincot (now marked only by Wincot Farm, apparently on the site of a former manor house) about four miles south of Stratford. Wincot was on the border of two parishes - Quinton and Clifford Chambers—and a "Sara, the daughter of Robert Hacket" was baptized in Quinton church on 21 November 1591. That the Hostess who starts off The Taming of the Shrew by throwing Sly out of her ale-house was based upon a Marian Hacket of Wincot, and that there was also a Cicely Hacket (her daughter?) working there as a maid at the time seems very likely.

That's the whole story. A real Wincot, in the correct location with a real Hacket family. In isolation, it doesn't prove or disprove anything. Peter's last sentence is exactly correct. It seems most likely that this could be a real reference to an actual village containing an actual Marian Hacket. However, if we are openly attempting to discover which county is best reflected in the work, this counts as evidence for Warwickshire as Peter, without any reluctance, is willing to acknowledge.

Now for Barber's version. She begins with an apparently open hand:

This passage of The Shrew suggests we might find Sly's Burton Heath close to Wincott, so perhaps we should identify that first. Four miles north-west of Stratford was a hamlet called Wilmcote, apparently spelt Wyncote in the Stratford Corporation's records on the 11th of November 1584. Shakspere's mother was born there, but there were no ale-houses there. Wilmcote was in the parish of Aston Cantlow, the parish to the north of Stratford-upon-Avon, and there was no record of Hackets living there.

To the south of Stratford were two further parishes, Quinton and Clifford Chambers. A 'Sara, the daughter of Robert Hacket' was baptized in Quinton church on the 21st of November 1591. A hamlet called Wincot straddled the border of these two parishes, but the official history of the parish of Clifford Chambers confirms of Wincot and another hamlet, Alestone, 'Neither of these hamlets has ever included more than a few houses'.
Despite excavations, no sign of any Wincot ale-house has been found. So was 'Marion Hackett, the fat ale-wife of Wincot', a fabrication?

Unlike Farey, Barber laces her account with insinuation. We do that at Oxfraud, though to a more limited extent. I have, for example, carefully chosen a typeface which mimics a worn out typewriter for quotations from her transcript. Admitting it is another trick. But then we don't see this as an academic argument. Barber does. First she drops in a strawman. Wilmcote has strong Shakespearean associations and is the site of Mary Arden's farm and The Mary Arden Inn and another alehouse, The Mason's Arms. Neither of these existed in Shakespeare's lifetime but these were villages, villages had alehouses and new ones were often built on the site of old ones. Her statement that "there were no alehouses there" is not true. She doesn't know. The correct statement (we checked with the local historical society) is that "there are no records of an alehouse in Wilmcote at that time". Only a suburban southerner would hyphenate alehouse, by the way. In Shakespeare's day, ale was the only safe thing to drink. It is, however, very likely that there was an alehouse in Wilmcote, a village which now sustains two but has not greatly enlarged since Shakespeare's day.

Up to this point, none of this matters. Barber is happy whether Wyncote or Wilmcote had an alehouse or not. Because Wilmcote/Wyncote is not where Marian Hacket of Wincot probably lived.

Barber admits, gingerly, that there is another Wincot. But before we go on, she's hiding something and this is what it is. Shakespeare says nothing about alehouses. He refers to an 'alewife'. This could refer to the geographical location of an alewife's house but could also refer to an alewife who came from Wincot. In fact, it could refer to a fat alewife from Wincot, who was standing in Shakespeare's audience three feet away from the actor delivering the line. Marian Hacket might have been a fat alewife from Wincot who had been sharing a bed with a Lord Chamberlain's man that afternoon. That would be a joke that half of Bankside could enjoy instead a few of Will's neighbours or childhood friends.

So back to Barber's question. "So was 'Marion Hackett, the fat ale-wife of Wincot', a fabrication?" I don't know. She doesn't know. No one knows. Just as she has no idea whether there was an alehouse in Wincot or not despite her very strong insinuation. The local history society know of no excavation in search of an alehouse but that too would have no weight. It is a possible, sound, legitimate reference to the neighbourhood Shakespeare grew up in, supported by local records. Barber's counter claims are smoke and mirrors. She tries to imply Wincot is too small for our notice, (one of its two Domesday entries records taxes of 6 geld units - quite large - it probably had an alehouse then!). And she goes on.

There is a much more substantial contender for Wincot thirty-four miles north, in Staffordshire. Eleven hours' walk from Stratford, this Wincot (spelt Wilnecote) is on the old Roman road of Watling Street. Watling Street ran from the south-east of Britain to the north-west, connecting three Kentish ports (Dover, Lympne and Reculver) to Canterbury before continuing through London and St. Albans to Wroxeter in Shropshire, near Shrewsbury and the Welsh border. We know Watling Street nowadays, north of London, as the A5.

This is the payload. Barber appears to be earnestly assessing one possibility only for the purpose of palming another card into her audience's hand. "Forget Warwickshire, I have a much more substantial possibility. You can get ale and even a cooked breakfast because it's on the A5 and has a Little Chef". She doesn't have a shred of evidence that Shakespeare, her own candidate, or any other ever explored Tamworth, the A5, or anywhere north of Stratford for that matter, yet she expects us all to yield to what she (and only she) insists is a much stronger claim. 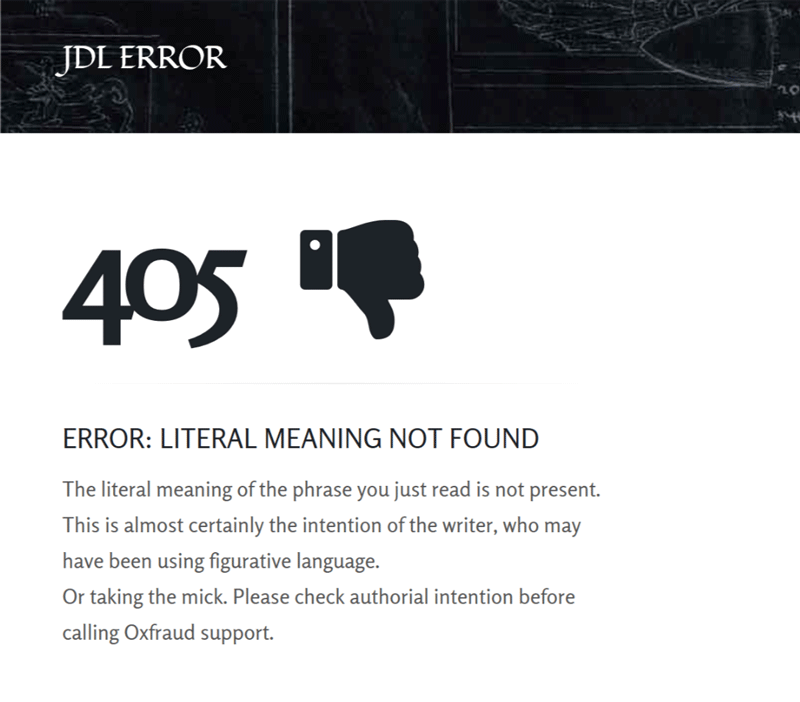 Attempting to extract authorship evidence by reducing Shakespeare's text to its apparently literal meaning is such a regular doubter error that we added an error message to the site to point it out. Error 405 occurs when the literal meaning being advanced as evidence by doubters is not present. Barber makes this error regularly though she will try and excuse herself by hiding behind the idea that she has merely added a layer of additional significance rather than attempting to lead her learners up a new garden path. Classic cases include the discovery of Romeo's sycamore grove in Verona (actually plane trees planted in the 80s) or a canal route from Verona to Milan which could only be known to visitors to Italy (actually involving travel on drainage ditches which may or may not have contained water). This MOOC is full of this chicanery. The sections on Literacy or the Coat of Arms, for example, are calculated attempts to create doubt where none exists. Barber has put a lot of work into detaching Marian Hackett from Wincot. Yet as a creative writer (and a good one) she should understand that forging literal links with dramatic work is mostly a waste of time when it comes to authorship attribution. there is much better evidence to deploy and there are much better topics for learners to appreciate what is meant by "authorship".

Error 405 in Course Module C3.4: reference to Marian Hacket may not be literal.

Once doubters have camouflaged the existence of real links in a real chain of evidence, they can substitute an array of these much weaker links in support of their claims for alternative candidates. To tread this well-worn and completely discredited path, Ros invites authorship wildman, Alexander Waugh, to the stage to explain why a host of early references points elsewhere. In a recent debate with Professor Jonathan Bate, Alexander trailed the proof that The Earl of Oxford was buried under Shakespeare's monument in Westminster Abbey, the statue itself pointing at what he believes are the bones of the true Bard in their final resting place. He has yet, to our knowledge, to convince a single other person that his great discovery has any merit.

Alexander's alternative history is nonsense too. More entertaining nonsense than Barber's. But don't eat the yellow snow. All doubter snow is yellow.

We've dwelt this long on one reference because Barber's entire MOOC, all four weeks of it, is made entirely of the same wet straw as this alternative Wincot argument. It not scholarship, it's not even legitimate enquiry since it involves artful misreadings of the work and similar abuse of the historical record. It's a kind of antiseptic cleansing, using chemicals designed to remove only those stains which are injurious to doubt. Her problem is that the rest of the world calls those stains evidence. Counter evidence in Barber's case.

A very great deal of authorship distress could be avoided if authorship sceptics learnt to distinguish between ‘correlation’, ‘corroboration’ and ‘causation’ when they amass their collections of suggestive coincidence. It is conceivably possible that male inferiority may be exacerbated by the appointments of female editors of The Harvard Law Review to the point that only Nicholas Cage films can assuage it but although the curves show an absurdly high correlation, there is no relationship which could cause one to be used in evidence to support the other. The chart below illustrates the dangers into this confused abuse of statistics can lead. 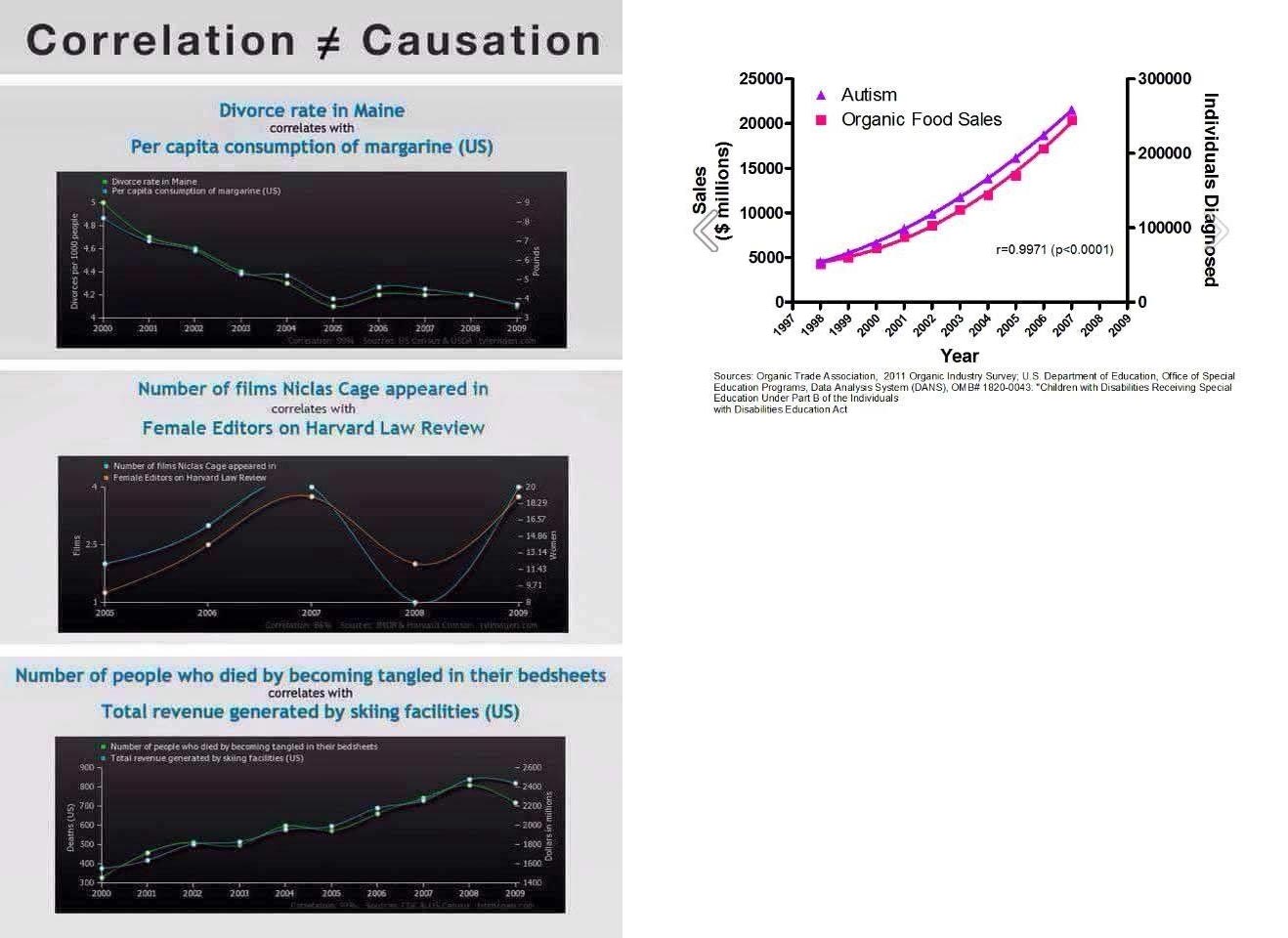