Sonnet 125, reproduced in its entirety below, begins 'Were 't aught to me I bore the canopy,'.

Naturally, Oxfordians claim that Oxford, as an aristocrat, bore the canopy and therefore this sonnet identifies him as the author.

My personal theory is that many of the sonnets were written in reply to conversations between the author and an acquaintance and relate back to something that was said, maybe earlier in the day. However, without taking that an inch further, you have to question whether the Oxfordian interpretation stands up to even elementary practical criticism.

The subjunctive mood is conclusive. The author is saying 'If I had ever borne the canopy" i.e. 'you think it's a big distinction that you bore the canopy when I didn't because I am of a lower rank in society'. The author then goes on to list the reasons why it isn't such a great honour in the next ten lines of the sonnet. You'll only see the first four lines on Oxfordian sites.

Most are content with just the first line and none look at the meaning of the sonnet as a whole, which entirely contradicts their thesis.

However, there's no arguing with Oxfordians over the use of the subjunctive.

A historian on the imdb board called syntinen tried a different approach. Oxford did NOT ever bear the canopy she said. And she went on to prove it, demolishing instance after instance with the largely good documentation available about occasions where the canopy might have been borne above the monarch. Result? No Oxford. Whilst his inherited role as Lord Great Chamberlain did require him to perform in coronations (and he did service at the coronation of James 1), that service did not involve bearing the canopy.

Whenever the canopy is borne, it is borne by Knights of the Garter. There have been a very small number of exceptions but none in the reign of Elizabeth 1 (or Elizabeth II). The KoG was an honour for which Oxford was desperate but could never achieve. Before his disgrace during the Armada campaign he received votes for the honour from his peers, though never enough for Elizabeth to consent to the award. After the Armada incident, he received no more votes until the year he died, when he received just one.

No KoG, no bearing the canopy. No Oxford.

Once again, through lack of proper scrutiny, Oxfordians disqualify their own candidate with the same argument they are using to try and disqualify Will. My favourite online discussion with an Oxfordian arose from this defeated argument. Canopies rained in from everywhere as Oxfordians tried to catch the Earl in the act. One Oxfordian put forward the famous picture of Elizabeth on a litter, to which Roy Strong devotes a whole chapter in his book. Before finally being forced to accept that it was litter rather than a canopy, the Oxfordian argued that the Queen was sitting on a litter born by the man in red behind Her Majesty (in one hand, apparently) while the aristocrats bore a canopy over the whole. A Herculean feat of strength for which a 10 ton fork lift truck would be needed in our feeble modern era.

It is not a literal depiction. 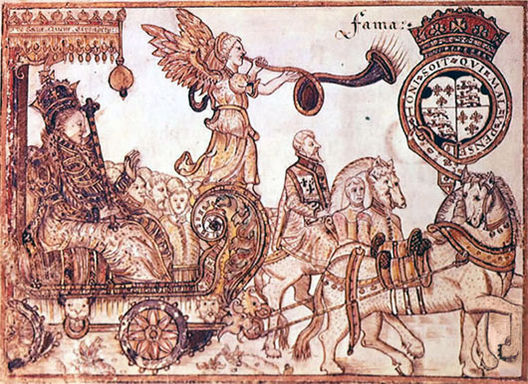 The countryside around it is identifiably two different properties belonging to the Earl of Somerset, (according to another book by William Leahy) so it is not portraying an actual procession. It contains imaginary renditions of Raglan and Chepstow Castles. There's no reason why, since it is a work of imagination, the monarch can't be on a flying carpet but there are only three processions involving canopies that could have involved the 17th Earl and we know that two took place on a litter and one on a wheeled 'chariot'. This is an artist's fanciful interpretation of a litter which has sacrificed engineering reality to the essential requirement of not obscuring the face of anyone important.

As for the Armada procession, Elizabeth travelled in a wheeled chariot. Contemporary accounts nail the door completely shut by describing De Vere riding a horse in the procession.

Offered as conclusive evidence of Oxford's authorship, Sonnet 125, turns out to be about the transience of rank and title and the wasted lives of pitiful thrivers who forgo their own pleasures and interests to fawn on those higher up the social scale. What the poet is offering is a true soul, poor but free and not mixed with seconds, by the art of flattery. Unmistakably the work of someone addressing a person higher up the social ladder.

Were 't aught to me I bore the canopy,
With my extern the outward honouring,
Or laid great bases for eternity,
Which prove more short than waste or ruining?
Have I not seen dwellers on form and favour
Lose all, and more, by paying too much rent,
For compound sweet forgoing simple savour,
Pitiful thrivers, in their gazing spent?
No, let me be obsequious in thy heart,
And take thou my oblation, poor but free,
Which is not mix'd with seconds, knows no art,
But mutual render, only me for thee.
Hence, thou suborn'd informer! a true soul
When most impeach'd stands least in thy control.

In his oxymoronic coupling, pitiful thrivers, Will shows once again, his extraordinary command of economy. He refers to the pitiful state of those whose whole existence is an attempt to thrive by flattering their betters. He needs but two words to do what has taken me sixteen. There's no trace of this type of elegant compression in any of Oxford's work, which inclines to verbosity rather than economy and insists on the observance of rank and title to the point of pedantry. It is clearly, unequivocally, written by a poet lower in the social scale than its intended recipient, clearly saying that the trappings of wealth and courtly life are nugatory compared to the rewards of true love, ‘not mixed with seconds’. It demonstrates a humility and capability for self-sacrifice which are nowhere evident in the biography of De Vere and a measure of verbal dexterity and metrical agility which come from an entirely different creative universe to the Earl’s plodding, self-pitying threnody.

In fact, it would be hard to find anything LESS likely to have been written by the 17th Earl of Oxford than Sonnet 125.