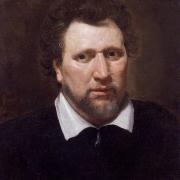 While they were both alive, Ben Jonson clearly felt a sense of rivalry with his fellow playwright. As an artist, Will not only outsold him at the box office but quite clearly had the better turn of phrase. It must have been irritating. So while the competition between the dramatists is active, we find Ben sniping at Will's lack of education, his poor geography and choice of subjects until Will pre-deceases him in 1616. Later that year, having spent months in its compilation, Ben supervised the publication of the first collection of his own plays. If only Will had taken the same trouble there would be no sites like this. 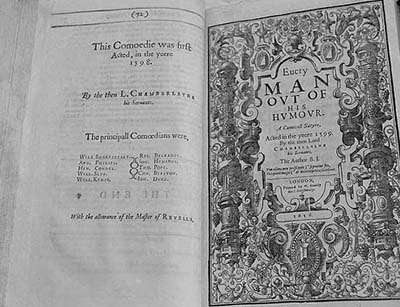 Seven years later, Ben writes one of the most famous tributes in history—an extensive verse introduction to Shakespeare's own First Folio.

In his collected works, as his first compliment to a dead rival, Jonson lists Will Shakespeare as one of eight 'principal comedians' and again as one of eight 'principal tragedians'. Individual play frontespieces have the dates of the first performance and the cast list where Will's name appears again. This can not possibly be Oxford. The Earl might be able to hide in a back room producing secret writing but under no circumstances could a peer of the realm act on the public stage. Anonymously.

It is not considered polite in Oxfordian circles to make any reference to Jonson's Folio. When forced to address the issue, the Oxfordian magic wand produces a second Shakespeare is to explain these references.

Jonson's frequent references to Will are the hardest thing for Oxfordians to explain. Ben even made a brief pilgrimage to Stratford upon Avon to sniff out Will's antecedents.

Ben's notebooks are conclusive. Hence the invention of another Shakespeare to explain them. In 1640, he published a selection from these notebooks, calledTimber, or Discoveries by Ben Jonson.In these reflective pieces, he returns to the subject of the man whose works were less learned but more popular than his own:

De Shakespeare nostrat. I remember, the Players have often mentioned it as an honour to Shakespeare, that in his writing, (whatsoever he penn'd) hee never blotted out line. My answer hath beene, would he had blotted a thousand. Which they thought a malevolent speech. I had not told posterity this, but for their ignorance, who choose that circumstance to commend their friend by, wherein he most faulted. And to justifie mine owne candor, (for I lov'd the man, and doe honour his memory (on this side Idolatry) as much as any.) Hee was (indeed) honest, and of an open, and free nature: had an excellent Phantsie; brave notions, and gentle expressions: wherein hee flow'd with that facility, that sometime it was necessary he should be stop'd: Sufflaminandus erat; as Augustus said of Haterius. His wit was in his owne power; would the rule of it had beene so too. Many times hee fell into those things, could not escape laughter: As when hee said in the person of Cæsar, one speaking to him; Cæsar thou dost me wrong. Hee replyed: Cæsar did never wrong, but with just cause: and such like; which were ridiculous. But hee redeemed his vices, with his vertues. There was ever more in him to be praysed, then to be pardoned.

This does not describe an Earl but it is definitely Will and almost certainly the author of Julius Caesar. This is the man Jonson knew as an actor and a playwright. Where the eulogies talk formally about a rival, here Jonson talks about a drinking mate. When he mentions Caesar, Ben is not talking about a line from the play but recalling a discussion he had with its author in an alehouse.

In the film Anonymous, De Vere and Jonson are co-conspirators and  Will, their front man, is their favourite topic of conversation so there are plenty of opportunities for such discussion.

Here we have Shakespeare, his writing habits and the subject of one of his plays being described by one of his close acquaintance, who happens also to be his main competitor. Without the close links we see hypothesised in Anonymous, without some further pressing requirement to keep a secret long after those concerned in it were dead, without some plausible circumstance for which there is no record or evidence, the probability that there is a mystery surrounding the authorship of the plays beyond what Jonson records here is highly unlikely.

And yet Oxfordians prefer to believe (and expect others to accept) that "all the contemporary tributes and references to Shakespeare the writer were by those who assumed that the name was real but knew nothing else about him, much less that he was actually the Earl of Oxford." Hank Whittemore.

It's clear that the third most famous Elizabethan and Jacobean playwright knew more than enough about Will to knock that bit of speculation on the head.