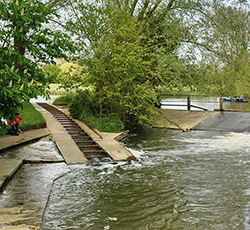 Hours, weeks, even months have been spent arguing about Proteus and Portia's route-planning and what its accuracy or inaccuracy reveals. The first thing to say is that above all the geographical explanations, there exists the overarching possibility that Will had only vague ideas of the exact layout and governance of the Veneto and didn't really give a toss whether he was being accurate or not.

Time and distance are both often ruthlessly compressed in Will's work, like an artist's perspective on a broad landscape. To get to Belmont and back for his suit, Bassanio needed Shylock's money for three months. How does this time actually elapse in the play? Not on a journey to Belmont and back, that's for sure. How much more likely is it that Will fiddled with his source material without giving much thought to where Belmont was or how long it would take to get there?  The three months were what we would now call 'virtual months' or 'stage months'.

The distance used by Oxfordians, headed by Magri and Roe, to uncover the location of Belmont is twenty miles.

Twenty miles is a virtual distance, which chimes with all the other uses of 'twenty' by Portia and her Belmont chums. At Oxfraud, we are perfectly sure that Will, when challenged about shortcomings in his geographical knowledge by Ben Jonson, would have replied 'Dramatic licence, mate. Get over it.' An Italian backdrop was a generic backdrop in Elizabethan theatre.

But as long as Oxfordians keep dragging the subject up…

Whenever Italy is mentioned in public discussion, Oxfordians will gleefully pose the question "What is a tranect?' in the hope of embarrassing Shakespeareans with another of Roe's discoveries in Oxfordian Italy.

Bring them, I pray thee, with imagined speed
Unto the tranect, to the common ferry
Which trades to Venice.

The OED has defined 'tranect' as a corruption of 'traghetto' since 1912. No one is satisfied with that. It just doesn't sound right. My own candidate is a corruption of 'tronchetto' or log. This is the current name given to the big landing stage in Venice where, after crossing the bridge, residents and visitors leave their vehicles and catch the public ferry to St Mark's Square, vehicles being banned in Venice itself. Since the ban was put in place in 1392, might there not have been an equivalent, called something similar in Shakespeare's time?

I had to read Roe's account several times before I realised that the construction he was describing, or deducing, was a boat-lift, a mechanical portage or weir bypass, a grander version of the one in The Mill Pond in Cambridge, familiar to anyone who has punted to Grantchester or the one on the Cherwell above. What he is proposing is clearer from his historical references than it is from his explanation (and for a reason). It's a system of rollers and pulleys that lift a flat bottomed canal boat up over a bank to bypass a weir or any other construction design to accommodate a small change in levels.

Now, we know Portia is planning to use a coach but were she making her journey by water, there are two reasons why a weir bypass cannot be what she is referring to.

The first and most obvious will apply to whatever Roe is describing, wherever he chooses to locate it. It is a device designed to enable the continuance of a journey by water. Roe is contending that it is a place where a journey would be broken (and Shakespeare is insisting on it). Yet the marvel that Roe's sources describe is a machine which takes a craft from the Venetian lagoon, over an earth bank and deposits it in a canal on the other side. My guess is that what impressed passengers was that they didn't have to get out of the boat. So if you were looking for a Venetian public ferry you wouldn't necessarily find one near the Oxfordian 'tranect' as the whole purpose of the device is to overcome the need to change boats. 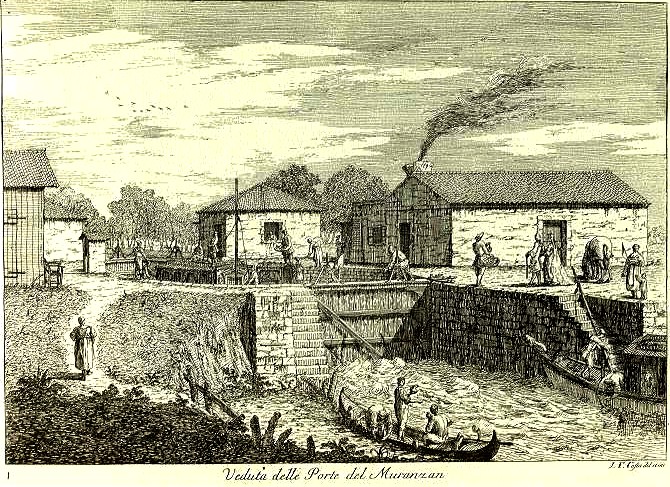 Porta del Moranzani, the lock at Villa Pallada, between Portia and the lagoon. If you are unlucky and arrive, as this craft has, just after the downstream gates have closed, it might take you an hour to get through as you will need to wait for a whole cycle to complete before you can enter and start another. So ask yourself, Portia, do you feel lucky?
Note that masted craft, as here, can pass through locks, but not under bridges like those below on the Milan network. The sail is furled as it can only be used with a following wind. The craft will be towed by horses.

The second objection to a water journey is that the Oxfordian 'tranect' is located at Fusina (to make the distances correspond to Portia's 20 miles). The mouth of the Brenta has been repeatedly blocked as, over the centuries, its outflow has been moved out of the Venetian lagoon altogether to prevent the build up of silt. So the place where travellers entered the River Brenta has been a bit of a moving target. In Oxford's time, the then recently canalised section started a mile inland from Fusina where there are docks and a lock at Porte del Muranzano. The mouth of the Brenta canal was open to the lagoon behind a breakwater.

There are implications for Portia's (and Balthasar's) putative journeys to and from the Villa Malacontenta. One - no 'tranect' is necessary nor is there a 'tranect' en route. Two - she was always in a hurry. Taking the water route from Malacontenta to the lagoon would be scenic but very slow. It's just 3.6 by water and 2.8 miles by road. Including the time needed to pass through the lock, this would be both unpredictable (see the engraving) and even at its fastest, would still not leave much change out of two hours for a journey that would take forty five minutes on foot. The quick way would be to do the 15 minute walk to the downstream side of the lock and then take a gondola the remaining four or five miles across the lagoon to your choice of jetty (molo) in Venice.

Surely a girl on a mission, with a deadline, is not going to risk a two hour canal journey to avoid a short walk or a five minute ride.

If the journey was by water, it takes far too long. If a coach was involved the distances don't correspond. And there's no tranect. 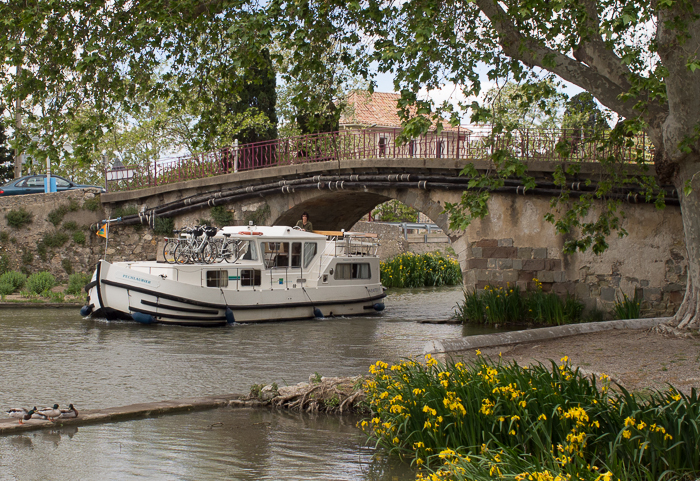 Canal travel, because of the narrow gauge and low bridges, does not feature masted craft or the traditional concept of sailing. 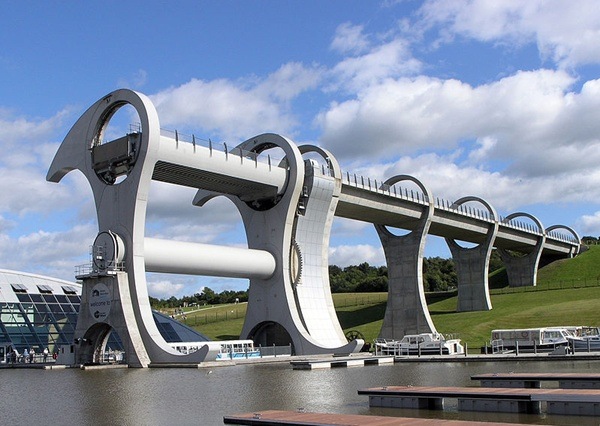 A modern Oxfordian 'tranect'. See if you can guess how it works. Even today this is not amongst the top transport options for the girl in a hurry. The answer is here.