Alexander Waugh returns forcefully to the subject of sailing to Verona.

In the latest rearrangement of Shakespeare Authorship Coalition Essays, published in response to Shakespeare Beyond Doubt he says:

"One has only to check the definitions of 'road,' 'tide' and 'shipped' in the Oxford English Dictionary to see that none of them applies exclusively to the sea. Shakespeare, moreover, signals to his audience that Valentine's journey is not to be taken by sea, but by river and, just in case of any lingering doubt, he has Panthino explain that by lose the tide...' I mean thou'lt lose the flood, and in losing the flood, lose thy voyage.' The 'flood' thereby refers to the timed rising of the water in the locks, which in the case of boats traveling from Verona to Milan, were located on the fossi that linked the rivers Adige, Tartaro and Po. It is now known precisely where those canal links were situated. Some of them are still in use today. All are well documented. Only in the rarefied world of Stratfordian academia is their existence still petulantly denied."

You have to question Waugh's motives for this aggressive passage. He KNOWS he's talking absolute nonsense. Nobody can possibly believe that Will is using 'tide' to mean the flooding of a lock. No one in England had seen one when this play was first performed. Even in Italy, Proteus and Panthino are both in Verona, hundreds of miles (by water) from the nearest lock. Miss a tide and you've lost a day. Miss a lock and you can have a beer and catch it again in an hour.

'One only has to check' the text of TGOV, to see that Will double and treble underlines exactly what he means with punning wordplay on 'tide' and 'tied', leaving absolutely no room for Waugh's wilful misinterpretation. We even have non-existent tides in other Italian settings, The Comedy of Errors, for example, written about the same time.

"Both wind and tide stays for this gentleman, And I, to blame, have held him here too ..."

How many times does it need saying? You don't take advantages of tides that aren't there and you don't need wind on a canal barge. The tidal draught of the Med is negligible because it is almost entirely enclosed by the landmasses of Europe and Africa. It's a very big lake with a very small outlet into the Atlantic.

Will has in mind the Thames, the river he crossed every day. He may well know there are no tides in the Med and just be using a bit of dramatic licence.

Only Oxfordians. 'Any explanation is good enough, however implausible', Oxfordians appear to be saying as they argue a plausible sailing route or the case for Bilton Hall as the source of Ben Jonson's 'Swan of Avon' soubriquet. 'This is an explanation and don't you dare pick me up on it'.

We have seen the death of the courtly and legal 'elite knowledge' arguments. They can't be backed up with examples and there are far too many conclusive counter arguments. Oxfordians are fighting a bit harder to isolate Will from any kind of Italian knowledge.

But backing the 'Sailing to Milan' horse is just heaping more and more ridicule on their technique. If Oxfordians argued "The Earl is just using dramatic licence, adjusting the setting to what's familiar to the groundlings" Shakespeareans might raise an eyebrow at the inconsistency but they would lose the gift of an incontestable counter argument. Oxford didn't sail from Verona to Milan in 1575 and nor did anyone else.

However, they've walked so far out on this plank, there's no way back. 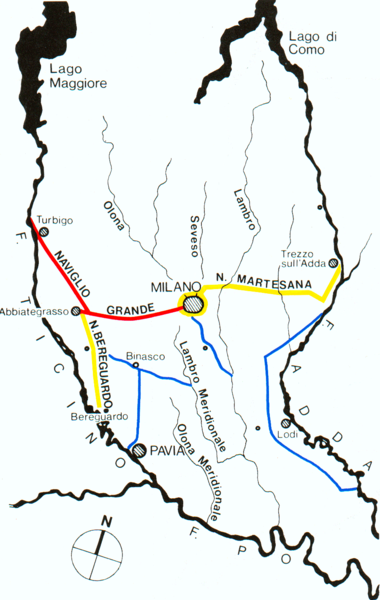 The Italian Government has decided to restore the Northern Italian canal network to enable tourists to take barge holidays and travel, on canal boats, from near Lake Maggiore to the Adriatic.

If and when they finish the network, IF you can then take a barge from Verona to Milan, the circuitous route will quadruple the the actual distance to nearly 450 miles as you will still have to go east from Verona to the Adriatic and then up the Po. Each self-operated lock adds the equivalent of 1 mile. Locks operated by a lock keeper add considerably more as they will try to group traffic. Journeys are calculated at 3mph. It'll take around 150-175 hours, therefore, on a barge with a marine diesel engine. That's without all the customs and border difficulties you'd have encountered 300 years before Italian Unification. It might have taken weeks in the 16c.

Even with all the restoration and additions complete, no one is going to look at a map and think sailing from Verona to Milan is a normal thing to do. You could do the same journey FIVE TIMES on foot and TWENTY times on horseback and still arrive ahead of a barge doing it once.