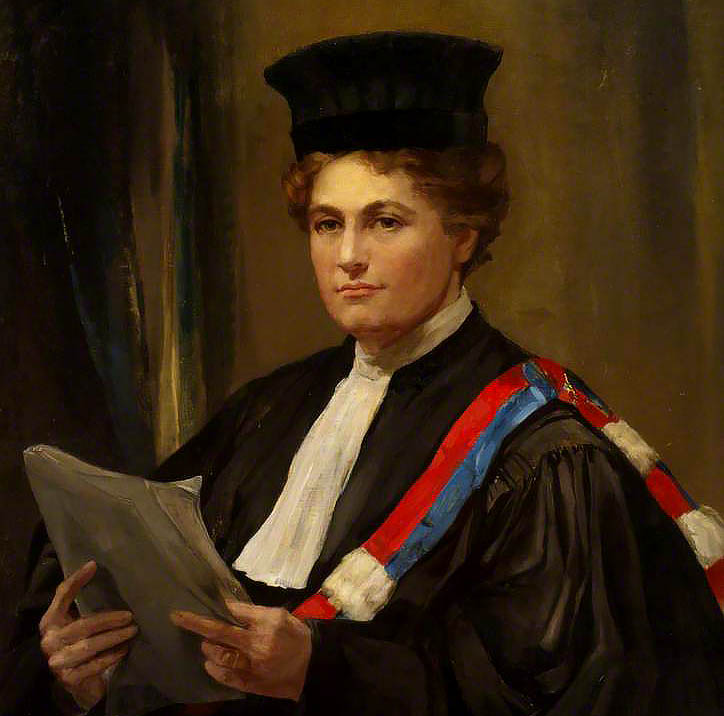 Professor Caroline Spurgeon's work, Shakespeare's Imagery, represents years of work looking for patterns in the number and content of Shakespeare's images, assessing what can be learnt and relating them to the thematic contents of the work. When people talk about animal imagery in Lear or disease imagery in Hamlet, whether they know it or not, they are citing connections first made by Spurgeon.

Her book, with its exhaustive listing and categorisation is still one of the definitive works on Shakespeare's language, though digesting it was the sort of hard work that was very unpopular when I was at university. Now, in the age of semiotics, it's right back in fashion.

"I thought Caroline Spurgeon settled this in 1935 with her master work Shakespeare’s Imagery. There seems to be absolutely no doubt to anybody who reads Shakespeare, and is familiar with the text, that these are the works of a countryman. This is a man who knows about kites and fields and it's certainly not the work of an aristocrat." Stephen Fry SBT 60 minutes 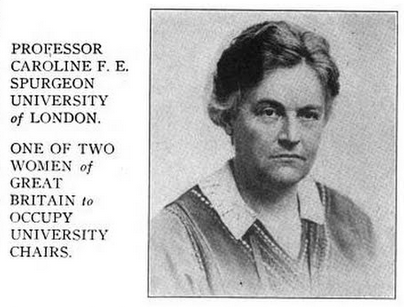 Spurgeon's work ties Shakespeare to Warwickshire and Stratford upon Avon in a knot no one has come close to loosening. By a weird coincidence, her book is best known for an attempt to take a passage in the canon and plant it in the real world. Ironic that the language expert should be associated with an exercise in literary biography, the favoured pastime of Oxfordians.

She links seven lines in Lucrece to eddies under Clopton Bridge on the River Avon, just outside Stratford. She does a pukka job and her connections are far tighter than most Oxfordian equivalents, especially their attempts to link De Vere to the Avon.

Marlovians, who now also have an authorship PhD amongst their number, have impudently nicked the whole analysis, without crediting it to Spurgeon, and applied it to London Bridge and Marlowe. The odd Oxfordian website, without a trace of irony, will pick up just this one piece of Spurgeon's work and hold it up in ridicule as an example of how Shakespeareans contort evidence. I can't believe they know who they are quoting, especially when you look at what they have built out of much slighter material like Harvey.

Since we can't discuss her book meaningfully in a short article, here is her biographical illustration. It isn't conclusive, of course, but her steady, workmalike construciton and  solid detail highlights how little effort goes into making this kind of connection in the land of Oxfordianism.

Although doing this largely for amusement, Spurgeon's sketch of the bridge is very accurate and rather accomplished.  Her link between the work and the author's unwritten biography is as close as anything in the debate. Her detailed story is carefully stitched together unlike, for example, Oxfordian attempts to connect De Vere to Love's Labours Lost via an putative visit to Navarre.

However, like all attempts to tie creative work to dull reality (and unlike her analysis of imagery), it may be highly suggestive and possibly even useful circumstantial evidence but it still falls a long way short of proof of authorship matters.

Which puts it in exactly the same category as everything offered by the doubters.

As through an arch the violent roaring tide
Outruns the eye that doth behold his haste,
Yet in the eddy boundeth in his pride
Back to the strait that forced him on so fast,
In rage sent out, recall’d in rage, being past:
Even so his sighs, his sorrows make a saw,
To push grief on and back the same grief draw.

I feel as sure as I can be of anything that these many pictures drawn by Shakespeare of the movement and behaviour of a river in Hood are all boyhood memories of the Avon at Stratford. This, I believe, is peculiarly true when he compares the movement of the waters to the emotions and passions of men. I had an interesting confirmation of this belief on one visit to Stratford recently, when I made the acquaintance of Captain William Jaggard, the owner of the old print and book shop in Sheep Street, and descendant of the Williarn Jaggard, who, in 1599 and 1612, printed and published the Passionate Pilgrim, and from whose press, in 1623, the ‘First Folio’ was issued.

I was telling Captain Jaggard that I was very anxious to see the river in flood, and particularly to stand on old Clopton Bridge and watch the movement of the current, as Shakespeare often referred to it. ‘Oh yesl’ he said, ‘and you should stand on the eighteenth arch' of the bridge (the one nearest the London side), for when the river is in flood, the force of the current under the adjoining arches, combined with the curved shape of the bank on to which it is driven, produces the most curious effect. I have often stood there and watched the current being forced beneath the narrow Tudor arch, on to the right bank at an angle which produces a swirling eddy, so that the water is then forced back through the arch equally swiftly and in an exactly contrary direction to that in which it has just come.’ 'I have’, he added, ‘sometimes hardly been able to believe my eyes when I have seen sticks or straws, which I have just noticed swirled on the flood downward through the arch, being brought back again just as swiftly in the opposite direction and against the flood weight.'

Captain Jaggard, as he said this, was at the further end of his shop, searching among its piled-up masses of books and papers for some prints he wanted to show me, and his voice, coming thus somewhat muted from the distance, gave me the most curious thrill and start, as if it were a voice from the dead.

For here was a present-day Stratfordian describing to me in prose, in minute detail, exactly what a Stratford man had thus set down in verse nearly three hundred and fifty years ago.

I at once called out to Captain Jaggard asking him to write down what he had just said, which he kindly did, and I then said, ‘ Can you find me a copy of Shakespeare's Poems?’ and he laughingly answered, ‘I think perhaps I can ", and returned to me bringing back a volume along with him. I turned up the above quotation and showed it to him. He had not previously noticed it and was extremely interested.

Later, I went down myself to the river bank and stood looking under the eighteenth arch. The river that day was perfectly calm and smooth, but, even so, on watching closely, I could easily follow the characteristic movement of the current, even though it was slow and gentle. There happened to be a big tuft of grass on it which sailed under the arch at an acute angle straight on to the bank, as in the sketch (frontispiece), then swirled round in an eddy, and proceeded to return under the arch in the direction whence it had just come.

There is a sort of little hook or bend in the bank just below where the current strikes it after coming under the arch, which produces the eddy and helps to send the water back again (see sketch). just because, when I saw it, it was quite gentle, this unusual and unnatural movement of the water was perhaps more curious and marked than it would have been in furious flood.

But there was no question that here was the very spot where Shakespeare must often have stood as a boy, and this was the very phenomenon he had noticed and described with such meticulous accuracy. Years ago, before I knew Shakespeare’s ways as well as I do now, I had-rather carelessly-always thought this image probably referred to the current under one of the arches of old London Bridge, which, we read, was very swift, so that at times it was quite a feat to shoot through it in a boat; but closer knowledge of his habits and methods convinced me that Stratford was the place to seek for the original of it, with the result just described.